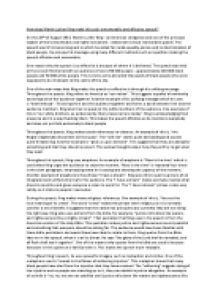 How does Martin Luther King make his 'I had a dream' speech so effective and memorable?

﻿How does Martin Luther King make this such a memorable and effective speech? On the 28th of August 1963, Martin Luther King - an American clergyman and one of the principal leaders of the United States civil rights movement - delivered his most memorable speech. The speech was 17 minutes long and in which he called for racial equality and an end to discrimination of black people. He conveys his message using many different methods such as repetition making the speech effective and memorable. One reason why the speech is so effective is because of where it is delivered. The speech was held at the Lincoln Memorial with an audience of over 250 000 people - approximately 200 000 black people and 50 000 white people. This is ironic as he attracted thousands of black people who were supposed to be irrelevant to the centre of the city. One of the main ways that King makes his speech so effective is through his unifying message. ...read more.

The ?I have a dream? makes everyone realise what America could be and gives everyone a vision to work for. The ?I have a dream? phrase is also very catchy so it sticks in people?s memories. During the speech, King makes many religious references. One example of this is, ?live out the true meaning of its creed?. The word ?creed? makes the phrase seem religious as it is normally used for a set of beliefs. It suggests that the nation has principles and currently they are not living the right way. King also uses extracts from the bible, for example, ?justice rolls down like waters, and righteousness like a mighty stream?. That quotation that King uses in his speech is from the American version of the Holy Bible. This quotation makes justice and righteousness sound peaceful and something that everyone should be aiming for. The audience would have been familiar with these bible quotations and would have been able to relate to them. ...read more.

Another method used by King which makes his speech effective and memorable, is his style of delivery. King makes eye contact with all sections of the audience, trying to connect with everyone, and making it seem relatable. When King is talking about his dream, he looks up as if it is in front of him, inviting others to join his dream. Whilst speaking, King pauses regularly, allowing time for the audience to think about what he is saying. King often pauses after phrases, emphasizing them and letting them hang in the air, causing them to stay in people?s memories. This is especially with his ?I have a dream phrase?. To conclude, King uses many different methods that makes his speech so effective and memorable. I think that the main method which does this is unifying him and the audience together. From his speech, you can tell he was prepared to fight for justice with everyone else for ?our nation?. Whilst watching the video of his speech, you can tell how passionate he was about wanting rights not just for himself, but others all over America. ...read more.