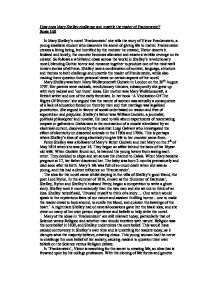 How does Mary Shelley challenge and unsettle the reader of Frankenstein?

How does Mary Shelley challenge and unsettle the reader of Frankenstein? Rosie Hill In Mary Shelley's novel 'Frankenstein' she tells the story of Victor Frankenstein, a young idealistic student who discovers the secret of giving life to matter. Frankenstein creates a living being, but horrified by the monster he created, Victor deserts it. Isolated and lonely, the monster becomes alienated and exacts a terrible revenge on its creator. So follows a whirlwind chase across the world in Shelley's revolutionary novel, blending Gothic horror and romance together to produce one of the most well known stories of all time. Shelley uses a combination of context, language, structure and themes to both challenge and unsettle the reader of Frankenstein, while also making them question their personal views on certain aspects of the novel. Mary Shelley was born Mary Wollstonecraft Godwin in London on the 30th August 1797. Her parents were radicals, revolutionary thinkers, subsequently she grew up with very radical and 'out there' ideas. Her mother was Mary Wollstonecraft, a British writer and one of the early feminists. In her book 'A Vindication Of The Rights Of Women' she argued that the nature of women was actually a consequence of a lack of education forced on them by men and that marriage was legalised prostitution. She argued in favour of social order based on reason and free of superstition and prejudice. Shelley's father was William Godwin, a journalist, political philosopher and novelist. He used to talk about experiments of reanimating corpses or galvanism. Galvanism is the contraction of a muscle stimulated by an electrical current, discovered by the scientist Luigi Galvani who investigated the effect of electricity on dissected animals in the 1780s and 1790s. This is perhaps where Shelley's idea of using electricity to give life to her monster came from. Percy Shelley was a follower of Mary's father Godwin and met Mary on the 5th of May 1814 when she was just 16. ...read more.

From this beginning sentence, we can predict that something bad is going to happen due to the use of the word 'dreary'. It also says, '...the rain pattered dismally against the panes ...' This is not only an example of weather foreshadowing, but also of pathetic fallacy. 'Frankenstein' is not just a Gothic novel however; it is also a Romantic novel, one of the first books to be written at the beginning of the Romanticism movement. Romanticism was an artistic and intellectual movement that began in the late 18th century, which particularly focuses on adding emphasis to emotions such as trepidation and horror. Important features of a Romantic novel include a devotion to beauty and the preference of a solitary life as apposed to a life in society. It is called romanticism as it comes from the term 'romance' which is a poetic heroic narrative originating in the medieval time. 'Frankenstein' is both a Gothic and a Romantic novel as it contains points for each genre. An alternative title to Shelley's 'Frankenstein' is 'The Modern Prometheus'. Prometheus was a Titan from Greek mythology who is said to have created mankind by fashioning figures out of clay in the shape of man, and allowing the goddess Athena to breathe life into them. Zeus, the Lord of all Gods, was angered by this and forbade Prometheus from teaching mankind the ways of civilisation. Prometheus disobeyed Zeus and stole fire from the heavens and gave it to mankind. As a punishment, Zeus chaining him to a mountain and sending an eagle down every day to pick out his liver. Over night, his liver would grow back only to be eaten out again the next day. This would continue for 30,000 years. Prometheus was also a myth told in Latin but was a very different story. In this version Prometheus makes man from clay and water, again a very relevant theme to Frankenstein as Victor rebels against the laws of nature and as a result is punished by his creation. ...read more.

This relates to the story of creation, of Adam and Eve, the perfect man and woman until they gave into temptation. The monster is saying that he should have been the perfect man, the adored creation, but that he is the fallen angel. The original fallen angel was Satan, who was cast down from the heavens to h**l. This point relates back to my previous point that man is made good, and made evil by others actions. Satan began life as an angel and became the Devil, just as the monster did. Victor then refers to him as 'wretched devil'. It is unsettling that a creature so evil can be related back to angels and religion. I was dubious beginning to read 'Frankenstein' as what I had previously heard about Shelley's novel, portrayed it as classic horror story about a murderous monster. Once I had finished though, I discovered that it was in fact much more than a horror story. I found myself enjoying the novel, and the analysis of it made me realise things I had not realised in reading it. The popularity of the novel has increased in recent times, due to the popularity of film adaptations such as the 1994 film directed by Kenneth Branagh. Its popularity is due to its continuing relevance to today's world, a concept that Shelley captured perfectly. I find it unsettling that such a young girl could write such a radical and horrific book at the young age of 19. Shelley herself said, 'How I, then a young girl, came to think of and to dilate upon so very hideous an idea?' I find it interesting that in a world dominated by men, Shelley wrote a book that is dominated by men considering her mother was a fierce feminist. Overall I enjoyed this book more that I thought I would, and found it is all about neglect, horror, romance, knowledge and man trying to play God. I would recommend this book, though I feel you need to analyse it in order to get as much as you can from Shelley's novel. ...read more.