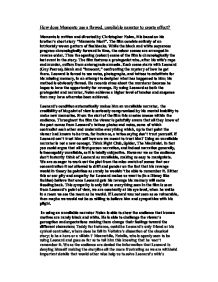 How does Memento use a flawed, unreliable narrator to create effect? Memento is written and directed by Christopher Nolan, it is based on his brother's short story

How does Memento use a flawed, unreliable narrator to create effect? Memento is written and directed by Christopher Nolan, it is based on his brother's short story "Memento Mori". The film consists entirely of an intricately woven pattern of flashbacks. While the black and white sequences progress chronologically forward in time, the colour scenes are arranged in reverse order. Thus the opening (colour) scene of the film is chronologically the last event in the story. The film features a protagonist who, after his wife's rape and murder, suffers from anterograde amnesia. Each scene starts with Leonard (Guy Pearce), blank and "innocent," confronting the mystery of how he got there. Leonard is forced to use notes, photographs, and tattoos to substitute for his missing memory, in an attempt to decipher what has happened to him; his method is obviously flawed. He records clues about the murderer because he hopes to have the opportunity for revenge. By using Leonard as both the protagonist and narrator, Nolan achieves a higher level of tension and suspense than may have otherwise been achieved. Leonard's condition automatically makes him an unreliable narrator, the credibility of his point of view is seriously compromised by his mental inability to make new memories. ...read more.

Does he remember his wife's death? By creating an impossible puzzle is he subconsciously trying to punish him self for it? Is Sammy Jenkins real or just a delusion of Leonard's mind, a story made up to help Leonard forget and justify his wife's death, an alter ego of himself. The end of the film leaves you almost as confused as the beginning. Leonard's backward-forward investigation; with each scene supposedly bringing you closer to the truth leaves you inevitably puzzled, just who was the good guy? Who should we have trusted? In using an unreliable narrator you are completely free, there are no rules, you are putting the audience in the hands of a deeply flawed and subjective character. The audience has to decipher the lies to get to the truth. This is defiantly true for Memento, its Alice in Wonderland rabbit hole of incomprehensibility works to create numerous effects that if told in any other manner simply would not exist. The way the film is told backwards leaves the audience, even from the start, in complete anticipation, just who got shot and why. When Leonard comes to consciousness in the midst of a chase and wonders who he is running after or more to the point who is running from whom you are left tensely wondering how he got into this position. ...read more.

This helps to keep the audience on the edge of their seats. Nolan has structured the film in short bursts that are roughly equal to Leonard's attention span. Our confusion mirrors that of Leonard. By watching the scene backwards we are allowed to have interactions with the other characters with out any emotional history or background information and we can only struggle to interpret each scene as it comes. This makes our perception of the overall film much clearer. To conclude; the use of the unreliable narrator gives the film depth, or we may cynically say, the "illusion of depth". It also gives the film dramatic tension as I have demonstrated in this essay. The whole film is permeated with an eerie sense of knowing and danger. The story hinges on the perceptions of one man and he is flawed, we are left questioning how true any of our subjective realities are. How do we know the stories we tell ourselves are true? How do we know who we are? Is it only our past memories that give us a sense of identity and some hope of making order out of the events that happen to us? It is by making the narrator the central character that Nolan manages to create such interest and to sustain our fascination through what is a very complicated plot. By Ava Heffernan ...read more.