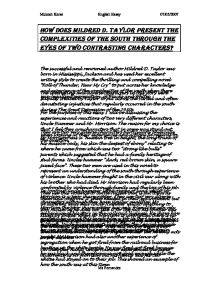 How does Mildred D. Taylor present the complexities of the south through the eyes of two contrasting characters?

How does Mildred D. Taylor present the complexities of the south through the eyes of two contrasting characters? The successful and renowned author Mildred D. Taylor was born in Mississippi, Jackson and has used her excellent writing style to create the thrilling and compelling novel "Roll of Thunder, Hear My Cry" to put across her knowledge and experience of the complexities of the south when there was legalised segregation of Blacks and Whites. The interesting and diverse characters in this story were skilfully created by Taylor to put across the varied and often devastating injustices that regularly occurred in the south during The Great Depression of the 1930s. For the purposes of this essay I will be discussing the experiences and reactions of two very different characters, Uncle Hammer and Mr. ...read more.

They use this violence to battle r****m that is put towards them and confront it when needed in their environment but in different ways and Uncle Hammer will do anything to stop r****m as he does not like it for the fact his brother was killed by whites. When Mr Morrison is confronted there is no stopping this machine that was brought from knowledge of the creations in stud farms "They was both of them from breeded stock and they was strong like bulls" but he only acts in self-defence. In contrast uncle hammer is the owner of land whilst Mr Morrison is a poor sharecropper. They are two very diverse characters although they have similar qualities. Mr Morrison the poor sharecropper has only friends he can rely on because of his story in the railroad business. ...read more.

This showed an example of how the south was at this time. On the other hand, Uncle Hammer experienced the same occurrence as Mr Morrison but his family was his two brothers that sacrificed themselves to make life better for blacks. During the civil war Uncle Hammer and his two brothers fought for how they believed the world should be. Uncle Hammer came out with a broken leg "limping slightly on his left leg" His brothers failed to return and he has come back to avenge his brothers and also to get justice. In conclusion, to this compelling book Mildred D Taylor used these two characters due to the fact that they were the tellers of what the south was like during the period of legalised segregation. They used their understanding to explain the difficulties as well as what would happen to Blacks if they were to disobey Whites. Mukesh Kerai English Essay 07/05/2007 Ms Fernandes ...read more.