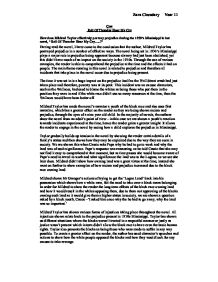 How does Mildred Taylor effectively portray prejudice during the 1930's Mississippi in her novel, ' Roll Of Thunder Hear My Cry&amp;#133;..?'

Cow Roll Of Thunder Hear My Cry How does Mildred Taylor effectively portray prejudice during the 1930's Mississippi in her novel, ' Roll Of Thunder Hear My Cry.....?' Having read the novel, I have come to the conclusion that the author, Mildred Taylor has portrayed prejudice in a number of effective ways. The novel being set in 1930's Mississippi plays a major role in prejudice being apparent because slavery had just been abolished, yet this didn't have much of an impact on the society in the 1930s. Through the use of various examples, the reader is able to comprehend the prejudice at the time and the effects it had on people. The main theme running in this novel is related to prejudice and therefore all incidents that take place in the novel occur due to prejudice being present. The time it was set in is a huge impact on the prejudice itself as the Wall Street crash had just taken place and therefore, poverty was at its peak. This incident was an excuse characters, such as the Wallaces, had used to blame the whites as being those who put them in the position they were in and if the white race didn't use so many resources at the time, then the Wallaces would have been better off. Mildred Taylor has made the novel's narrator a youth of the black race and also uses first narrative, which has a greater effect on the reader as they are being shown r****m and prejudice, through the eyes of a nine year old child. In the majority of novels, the authors show the novel from an adult's point of view - in this case we are shown a youth's reaction towards incidents experienced at the time, hence the reader gains a greater insight. It allows the reader to engage in the novel by seeing how a child explores the prejudice in Mississippi. ...read more.

Mildred shows the way they took revenge in a way that would help the reader to see that the whites had wanted to make sure that the revenge taken was taken as far as possible. 'Tarred and feathered him!' That was the description given of how they took revenge. It creates an image in the reader's mind of how he was treated. Mildred uses imagery in order to portray prejudice in a manner that is easily understood by the reader, in order for them to be able to differentiate the punishment of blacks and whites and the way in which it was done. As Taylor writes about the incident at Strawberry we are shown how the white people looked down upon the blacks and saw them as inferior. When Mr Barnett was called by a white woman, he responded to her call by saying 'just them,' he was referring to the T.J, Cassie and Stacey as being the ones he was serving at the time. He didn't describe them as 'other customers'. Instead Mildred shows a sense of discrimination by using the word 'just' that seems as though they are of no value. Here we see prejudice being portrayed through Mr Barnett's actions and words as he thinks he can give preference to the whites. Although he would have been trading a lot more, which would have been of benefit to him, he looked more upon a person's race and treated them accordingly. Here Mildred is showing that although Mr Barnett could have benefited from the money he would have received, he felt more strongly about fitting in with the view the majority of the whites has. This idea was one that involved prejudice, as they didn't judge the blacks by their character, rather by their skin colour. Instead of Mildred Taylor going straight into Mr Berry's state and describing him, she uses a lot of description such as imagery, to create a gloomy atmosphere that prepares the reader for seeing something abnormal. ...read more.

Prejudice has been portrayed as something that has an easy flow, however one can himself create barriers in order to prevent it from harming them. The hanging of TJ was about to go ahead, however seeing as Papa knew it was to be carried out shortly, he himself went and started a fire on the cotton field as he knew that was the ultimate way to success in postponing the hanging. Once the two races had noticed the fire they both went forth to stop it as the cotton was of great value to them. The two races came together to put out the fire started by Papa so that T.J's hanging may be postponed if not then called off. The way in which this was done was a rather peculiar manner. As Mildred describes the people helping as though they were 'sleepwalking'. She used the term 'sleepwalking' as the two races hadn't ever worked together and at this time they were all attracted to one cause without thinking deeply about what they were about to do. The main reason they did help in extinguishing the fire was incase it got to any of their belongings or land. The main significance in showing the way that the two races come together in order to put out the fire is a symbol of hope for the future, as they stand side by side without showing the hatred they have and this may in the future be turned back to and looked at as an incident where hatred, physical and verbal abuse wasn't present. I think that the main reason for which Mildred added such an event was in order for it to symbolize hope for the future. Overall, I believe Mildred Taylor has overcome her aim of effectively portraying prejudice during the 1930's Mississippi in the novel. The way in which Taylor uses language and descriptive phrases alongside accounts of racially motivated incidents, allows the reader to comprehend the prejudice apparent at the time and its inevitable consequences in an articulate manner. Zara Choudary Year 11 ...read more.