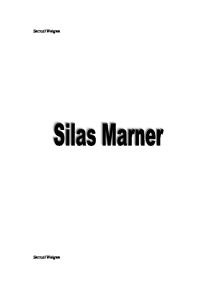 How does Molly's death bring happiness to Silas, Godfrey and Nancy?

Samuel Waigwa Samuel Waigwa How does Molly's death bring happiness to Silas, Godfrey and Nancy? At the moment, Silas is like a snail in a shell, waiting to come out and excel. Godfrey has a big surprise waiting for him on New Years Eve. His previous wife, Molly, is planning on showing up and avenge him for leaving him. She has not only come alone, but with her child. Molly is addicted to opium and needs another shot to energise her walk towards the Squire's house in the deep snow. She immediately collapses and the poor child is left alone. She manages to find a way towards the town and is mainly attracted to the bright light of Silas' house. Silas was suffering from another one of his fits and the child manages to find refuge from the weather in his house. ...read more.

She has replaced the stolen money "The money's gone I don't know where, and this is come from I don't know where." It seems that Nancy is not totally happy with her life as wife of Godfrey. Although she loves him very much and is happy when he is happy, she desperately desires children. Godfrey also feels that he's missing something in his middle age. Apparently the couple had tried to have children but failed, and Godfrey has thought about adoption, Nancy is opposed to the idea of bringing up a child not one's own. The child Godfrey suggested that they adopt was Eppie. Yet Nancy rejected this idea, not knowing that Godfrey was her real father. It does not last very long until chapter eighteen when Godfrey reveals he's secret to Nancy once and for all. 'Nancy,' said Godfrey, slowly, when I married you, I hid something from you- something I ought to have told you. ...read more.

Godfrey blames himself for the situation, saying, "It's part of my punishment, Nancy, for my daughter to dislike me. I should never have got into that trouble if I'd been true to you- if I hadn't been a fool. I'd no right to expect anything but evil could come of that marriage- and when I shirked doing a father's part too." In general Molly's death brought happiness to Silas, Godfrey and Nancy. Silas believes that Eppie is a gift from God and that's why he always lives he's door wide opened. Godfrey tried to show that he is a caring father by trying to adopt Eppie while Nancy was not desperate on having children but when Godfrey revealed his secret she was willingly to adopt her. Nancy's greatest love was when she bought Eppie a wedding ring. The story is quite ironic because one member of the Cass family took Silas's gold while the other gave Silas his daughter. It seems that now the Cass family will live in financial luxury while Silas experiences true fulfillment by raising a daughter. ...read more.