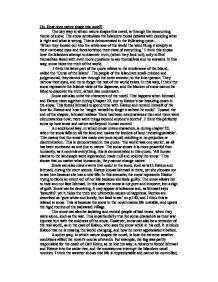 How does nature shape this novel?

Qu. How does nature shape this novel? The key way in which nature shapes this novel, is through the reoccurring theme of snow. The snow symbolises the Islanders moral debates with deciding what is right and what is wrong. This is demonstrated in the following quote- 'When they looked out into the whiteness of the world the wind flung it sharply at their narrowed eyes and foreshortened their view of everything.' I think this shows how the Islanders attempt to discover truth, (when they look out), only to find themselves faced with even more questions to ask themselves and no answers. In this way, snow hides the truth of the world. I think the latter part of the quote relates to the intolerance of the Island, called the 'Curse of the Island'. The people of the Island are small-minded and judgemental, they cannot see through the outer exterior, to the inner person. They narrow their eyes, and try to forget the rest of the world exists. ...read more.

Hatsue knows Ishmael is there, yet she chooses not to see him because she has a new life. In this scenario, the snow represents Hatsue trying to block an event out of her life because she feels guilty. The snow allows her to hide and not face Ishmael. In this case the snow is not pure and innocent, but a sign of guilt. Snow can be deceiving, it may appear wholesome and, as Ishmael says 'beautiful' yet it hides the truth and ultimately causes unhappiness. Berries are described as 'pure white and lovely, but fatal to eat' on p.140, and I think this is related to snow. This is because the snow in the novel makes life unstable, and upsets the rigid routine of the backward village. The snow can also be isolating and remind people of bad times- when they were alone, such as the war. This is particularly true for some characters as their war injuries hurt with the coldness of the snow. ...read more.

They can be equal, and have freedom. It is where they can hide from the rest of the world- be it from discrimination and injustice, or war. The cedar tree represents a fantasy place, which hides the fact that the real world is unfair. An additional way in which nature shapes the novel is how it changes the characters, and their lives. The community of San Piedro rely on the nature of the Island for economy, through fishing and strawberry picking. This affects the characters, as many of them are 'strong' due to their constant hard work during the day. In addition, they are also strong inside, their faces described as 'hard'. This may be due to the loneliness that they encounter through their jobs and shutting themselves off from the outside world. It also creates a divide in the people, because all the Japanese work strawberry picking on the Americans land. Overall, nature greatly shapes the novel, with the focus on the reoccurring theme of snow. Nature symbolises many of the major themes, such as discrimination and love. Research from- Sparknotes.com By Hayley Sheath 12MF ...read more.