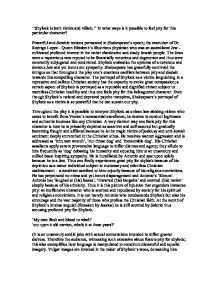 ''Shylock is both victim and villain.'' In what ways is it possible to feel pity for this particular character? Powerful anti-Semitic notions permeated in Shakespeare's epoch; the execution of Dr Rodrigo Lopez - Queen Elizabeth's illustrious physician who was an assimilated Jew - cultivated profound interest in the rather clandestine and shady Jewish people. The Jews were a mysterious race reputed to be financially notorious and degenerate and thus were constantly subjugated and constricted. Shylock embodies the epitome of a covetous and devious Jew and yet incurs our sympathy. Shakespeare has gracefully contrived the intrigue so that throughout the play one's emotions oscillate between pity and disdain towards this compelling character. The portrayal of Shylock as a victim languishing in a repressive and callous Christian society has the capacity to evoke great compassion; a certain aspect of Shylock is portrayed as a reputable and dignified citizen subject to merciless Christian hostility and thus one feels pity for this beleaguered character. Even though Shylock's twisted and depraved psyche transpires, Shakespeare's portrayal of Shylock as a victim is so powerful that he can sustain our pity. Throughout the play it is possible to interpret Shylock as a clean law-abiding citizen who seeks to benefit from Venice's commercial excellence; he desires to conduct legitimate and authentic business like any Christian. A very distinct way one feels pity for this character is how he is primarily depicted as assertive and self-assured but ...read more.

These words are a compelling and heartfelt gesture of the sincere love that thrived between Shylock and his late wife. They reflect the love that Shylock is capable of nurturing; the ring exemplifies his capacity to love. Thus the ring is an emblem reminiscent of Shylock's decency, morality and humanity that has been corrupted and sadly destroyed by the Christian abuse. This is a poignant notion to reflect on and should entail sympathy. One can also ascertain that Shylock is a principled individual advocating the correct ideals. He is cynical of the Christians; reviling their debauched ethos; this is revealed when he articulates 'What Christian husbands!'. The play displays a portrait of Bassanio as a prodigal, flamboyant and frivolous youngster who has foolishly squandered his wealth. He is concerned fundamentally about aggrandizing his affluence and prestige. The primary characteristic of Portia that he considers is how she is 'richly left'- which conveys his superficiality. This shallow and foolish man ends with the best circumstance while Shylock is left desolate and discredited. This unjust image should surely inspire pity. Another possible way to experience pity is by recognising how Shylock's financial and religious freedom is implacably constricted. The Jews were prohibited from possessing any real property and a large proportion accumulated wealth by practicing usury making significant contributions to the industry yet receiving excessive Christian enmity. ...read more.

Unfortunately for him, in becoming a Christian he is now alienated by his own 'tribe' and he now becomes what he most abhors. This not only exacerbates his situation but this may give rise to damaging psychological ramifications, evoking greater pity. Admittedly Shylock is degenerate (he cannot be blamed), but his powerful and realistic depiction incurs sympathy. Having meticulously examined Shylock we can comprehend the ways we experience pity for this character; Shakespeare contrives an image of injustice: Christians exercise excessive abuse, Christian machinations and scheming against a weak victim and Christians propelling Shylock to the brink of insanity. Acknowledging the cruel historical context Shylock is also alienated, betrayed, stripped of dignity, derided and scorned even though he has executed no crime. He possesses a callous and perverted mind - two blemishes attributed to Christian provocation. There are characteristics composed in his character that inspire understanding and empathy - the turquoise ring embodies his humanity. One must also remember an overlooked aspect: Shylock commands pity with sustained striking language. A prevalent notion that actively impedes our pity is knowledge of Shylock's wickedness but as Shylock himself understood it was Christians who taught him this 'villainy'; after all he merely speculated that it would be nothing more than a 'merry bond' and the pound of flesh was just a perverse fantasy not to be undertaken; he never actually anticipated that he would be embroiled in a circumstance that involved him, Antonio's chest and a knife. ...read more.