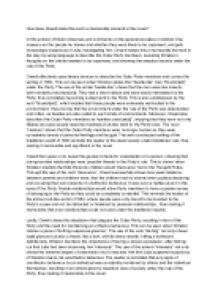 How does Orwell make this such a memorable moment in the novel &quot;1984&quot;? (Part 1 Chapter 5)

Ã¯Â»Â¿How does Orwell make this such a memorable moment in the novel? In this extract, Winston observes and comments on the general populace in Airstrip One, muses over the people he knows and whether they were likely to be vaporised, and gets increasingly suspicious of Julia investigating him. Orwell makes this a memorable moment in the play by using language to describe the Outer Party members, revealing Winstonâ€™s thoughts on the criteria needed to be vaporised, and showing the skeptical society under the rule of the Party. Orwell effectively uses literary devices to describe the Outer Party members and convey the setting of 1984. This can be seen when Winston states that â€œbeetle-likeâ€ men â€œflourish[ed]â€ under the Party. ...read more.

The well constructed setting of the totalitarian world of 1984 reminds the reader of the dead society under totalitarian rule, thus making it memorable and significant in the novel. Orwell then goes on to reveal the general criteria for vaporisation of a person, showing that strong-bonded relationships were possible threats to the Partyâ€™s rule. This is shown when Winston predicts that Mrs Parsonsâ€™ children would â€œdenounceâ€ her to the Thought Police. Through the use of the verb â€œdenounceâ€, Orwell successfully shows how weak relations between parents and children were, that the children had no shame when publicly declaring and accusing their own parents of unorthodox behaviour. It was even a righteous act in the eyes of the Party. ...read more.

Additionally, Winston mentions the importance of having a proper expression, after finding out that Julia had been observing him â€œintenselyâ€. The use of the adverb â€œintenselyâ€ not only shows the extreme degree of observation but it may also hint that Julia appeared suspicious of Winston due to his unorthodox behaviour. The reader is reminded that any signs of unorthodox behaviour by an individual was constantly monitored by others and the individual themselves, resulting in an almost gloomy, skeptical view of society under the rule of the Party, thus making it memorable in the novel. To conclude, Orwellâ€™s effective usage of language to implicitly convey the settings and attitudes of characters in the dystopian world of 1984, reveals to the reader that a world under the rule of totalitarian regimes could be as bleak and dark as portrayed in the novel, thus making this extract memorable. ...read more.