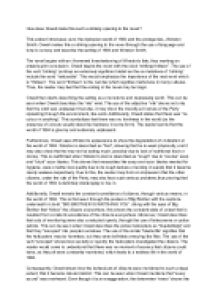 How does Orwell make this such a striking opening to the novel &quot;1984&quot;?

Ã¯Â»Â¿How does Orwell make this such a striking opening to the novel? This extract introduces us to the dystopian world of 1984 and the protagonistâ€”Winston Smith. Orwell makes this a striking opening to the novel through the use of language and tone to convey and describe the setting of 1984 and Winston Smith. The novel begins with an ill-omened foreshadowing of Winstonâ€™s fate, thus marking an already grim conclusion. Orwell begins the novel with the clock â€œstriking thirteenâ€. The use of the verb â€œstrikingâ€ portrays an extremely significant detail as the connotations of â€œstrikingâ€ include the word â€œnoticeableâ€. This would emphasize the importance of the next word which is â€œthirteenâ€. The word â€œthirteenâ€ is the number which signifies misfortune in many cultures. Thus, the reader may feel that the ending in the novel may be tragic. ...read more.

This shows that necessities like soap and razor blades needed for hygiene, were of either low quality due to its rough texture or lacking in supply that it became nearly useless respectively. Due to this, the reader may form an impression that the other citizens, under the rule of the Party, may also face such serious problems,thus proving that the world of 1984 is definitely challenging to live in. Additionally, Orwell reveals the constant surveillance of citizens, through various means, in the world of 1984. This is first seen through the posters of Big Brother with the captions underneath in bold: â€œBIG BROTHER IS WATCHING YOUâ€. Along with the eyes of Big Brother that â€œfollowâ€ the citizens everywhere, this shows the constant state of unrest that is resulted from constant surveillance of the citizens everywhere. ...read more.

Moreover, Orwell also mentions that â€œevery movement was scrutinisedâ€. The use of the verb â€œscrutinisedâ€ implies the extent to which every movement was critically examined, to see any signs of unorthodox behaviour. Thus, the control of facial expressions and behaviour was a â€œhabit that became instinctâ€, like Winstonâ€™s â€œnatural sanguineâ€ face. This implies to the reader that any unorthodox behaviour, like a pessimistic expression, was looked down upon, and any individual that exhibited such traits were heavily punished, since it is obvious that the citizens were clearly afraid, so much that this behaviour control â€œhabitâ€ became â€œinstinctâ€. To conclude, Orwell effectively uses language and tone to convey the dark dystopian world of 1984 at the start of the novel, to not only evoke interest from readers, but also warn them that the real world could also become bleak and gloomy like in 1984, under the rule of Totalitarian regimes. ...read more.