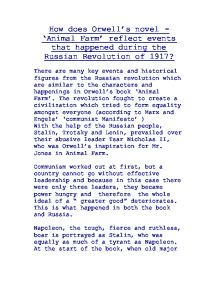 How does Orwell's novel - 'Animal Farm' reflect events that happened during the russian revoloution in 1917?

How does Orwell's novel - 'Animal Farm' reflect events that happened during the Russian Revolution of 1917? There are many key events and historical figures from the Russian revolution which are similar to the characters and happenings in Orwell's book 'Animal Farm'. The revolution fought to create a civilization which tried to form equality amongst everyone (according to Marx and Engels' 'communist Manifesto' ) With the help of the Russian people, Stalin, Trotsky and Lenin, prevailed over their abusive leader Tsar Nicholas II, who was Orwell's inspiration for Mr. Jones in Animal Farm. Communism worked out at first, but a country cannot go without effective leadership and because in this case there were only three leaders, they became power hungry and therefore the whole ideal of a " greater good" deteriorates. This is what happened in both the book and Russia. Napoleon, the tough, fierce and ruthless, boar is portrayed as Stalin, who was equally as much of a tyrant as Napoleon. ...read more.

At this there was a terrible baying sound outside, and nine enormous dogs wearing brass-studded collars came bounding into the barn. They dashed straight for Snowball, who only sprang from his place just in time to escape their snapping jaws." The enormous dogs are portrayed as Stalin's secret police the'KGB'. The 'KGB' was a league of conspiratorial police men, they used force and cruel punishment to subdue the people of Russia, they were one of the main reasons Stalin came to power. "Immediately the dogs bounded forward, seized four of the youngest pigs by the ear and dragged them, squealing with pain and terror, to Napoleon's feet. The pig's ear's were bleeding, the dogs had tasted blood, and for a moment they seemed to go mad." Napoleon had accused these pigs of terrible crimes which they are obviously innocent of, he tries to project all the blame onto someone other than himself he needed a scape goat or scape goats in this case, to avoid trouble for him. ...read more.

tweak and change until all that is left is one commandment "All animals are equal, but some animals are more equal then others" this is when the 'greater good' deteriorates completely, the pigs completely undermine the whole concept of what they were trying to achieve, equality has completely slipped from their minds and gone down the drain. "Years passed. The seasons came and went, the short animal lives fled by. A time came when there was no one who remembered the old days before the rebellion, except clover, Benjamin, Moses: The raven and a number of pigs." Orwell was extremely successful in revealing the atrocious truth about Russian Revolution, it started out with great intentions and a ideal of equality, but greed and too much Power consumed that aspiration. The Russian people lived in constant fear of Stalin and his murderous secret police, their lives were worse under his rule than the Tsar's. All of these crucial points are present in this book and by using animals with human characteristics, it makes the book an even better read. By Niamh Fleming. 10sm ...read more.

This is a response to a question asking candidates to identify the links Orwell makes between the events and characters of his novel 'Animal Farm' and the Russian Revolution. The candidate identifies a number of links and comments on them ...

This is a response to a question asking candidates to identify the links Orwell makes between the events and characters of his novel 'Animal Farm' and the Russian Revolution. The candidate identifies a number of links and comments on them with some fair analysis, drawing quotes from the source text that, whilst clumsy and over-sized, illustrate their points well. I would argue that in improvement needs to be made in terms of analysis though, as very little here appears openly objective e.g. "and this I donÃ¢â‚¬â„¢t understand, maybe they thought that if they confessed and helped Napoleon he would spare their lives, but that is where those poor, naive pigs were wrong, dead wrong. (sic)". The use of "dead wrong" at the end is just unecessary, and does not strengthen the answer at all because it is a personal viewpoint from a candidate; not even itallics mean this irrelevant tag elicits marks.

The Level of Analysis, though very systematic, is quite good. With the candidate addressing each link Orwell makes in turn to rise of Communism; the dogs as the secret KGB police; Stalin, Trotsky and Lenin and their representation as the three main pigs Napoleon, Snowball and Squealer; Marx as Old Major; the animals and their submissive oppression, etc. It's all very well-thought through and shows a profound understanding of the political commentary on Russia that the novel proposes.
The structure of the answer is also very good. It may be slightly regimented and not entirely the most time-effective approach, but it certainly is the best for getting down a lot of ideas about the links Orwell makes in turn. This is highly recommended if making a plan causes you to lose track of you ideas before candidates begin an exam answer.
Candidate should never write in an exam "this I don't understand" or words to tha effect. If candidates "don't understand", then they should not comment. This is in spite of only the candidate themselves as they should realise why Orwell has done something, as everything in novels like these is deliberate - he killed the pigs for a reason - to make Napoleon had to make the pigs look like they were traitors first.

The Quality of Written Communication shown by this candidate here is the only reason this answer didn't achieve five stars. It is quite frankly appalling for a GCSE student to have such a low level of writing ability. There is very little regard for grammatical standards and the answer is rife with comme splice ("Napoleon, the tough, fierce and ruthless, boar is portrayed as Stalin, who was equally as much of a tyrant as Napoleon.") and there are moments where slashes (/) are used; these should not appear in analytical text as they can and should be replaced with "or". To improve I suggest candidate re-reads their work thoroughly to get a better grasp of how their writing reads to others, because if examiners struggle to decipher incorrect spelling/improper grammar, they will disregard the essay altogether.