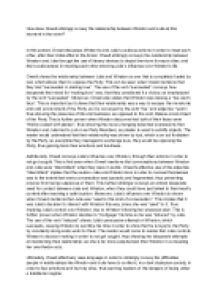 How does Orwell strikingly convey the relationship between Winston and Julia at this moment in the novel? (Part 2 Chapter 3)

Ã¯Â»Â¿How does Orwell strikingly convey the relationship between Winston and Julia at this moment in the novel? In this extract, Orwell discusses Winstonâ€™s and Juliaâ€™s cautious actions in order to meet each other, after their initial affair at the forest. Orwell strikingly conveys the relationship between Winston and Julia through the use of literary devices to depict their love for each other, and their cautiousness in meeting each other showing Juliaâ€™s influence over Winstonâ€™s life. Orwell shows the relationship between Julia and Winston as one that is completely fueled by l**t, which allows them to oppose the Party. This can be seen when Orwell mentions that they had â€œsucceeded in making loveâ€. The use of the verb â€œsucceededâ€ conveys how desperate their need for â€œmaking loveâ€ was, that they considered it a victory, as emphasized by the verb â€œsucceededâ€. ...read more.

The reader would understand that their relationship was driven by l**t, which is an act forbidden by the Party, so everytime they managed to exchange love, they would be opposing the Party, thus gaining back their emotions and liveliness. Additionally, Orwell conveys Juliaâ€™s influence over Winston, through their actions in order to not get caught. This is first seen when Orwell mentions that conversations between Winston and Julia were â€œintermittentâ€ when they were in public. Orwellâ€™s effective use of the adjective â€œintermittentâ€ implies that the caution Julia and Winston took in order to conceal themselves was to the extent that every conversation was sporadic and fragmented, thus preventing anyone from being suspicious of them. This further strikingly conveys an almost desperate need for contact between Julia and Winston, when they could have just talked to their heartâ€™s content after reaching a safe location. ...read more.

This is further proven when Winston decides to â€œmortgageâ€ his time as he was â€œinducedâ€ by Julia. The use of the verb â€œinducedâ€ shows Juliaâ€™s persuasive attempt on Winston, which succeeds, causing Winston to sacrifice his time in order to show that he is loyal to the Party, by voluntarily doing extra work for them. The reader would come to realize that Julia controls Winstonâ€™s decision making in order to not get caught, thus showing her desperate attempts at maintaining their relationship, as she is far more experienced than Winston in concealing her unorthodox acts. Ultimately, Orwell effectively uses language in order to strikingly convey the difficulties people in relationships like Winston and Julia have to confront, in a dark dystopian society, in order to feel emotions and be truly alive, thus warning readers of the dangers of being under a totalitarian regime. ...read more.