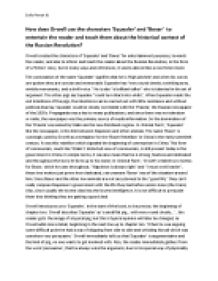 How does Orwell use the characters of Squealer and Boxer to entertain?

﻿Sofia Petryk 9J How does Orwell use the characters ?Squealer? and ?Boxer? to entertain the reader and teach them about the historical context of the Russian Revolution? Orwell created the characters of ?Squealer? and ?Boxer? for entertainment purposes, towards the reader, and also to inform and teach the reader about the Russian Revolution, in the form of a ?fiction? story, but in many ways and references, it seems almost like a non-fiction book. The connotation of the name ?Squealer? signifies that he is ?High pitched? and when his words are spoken they are concise and memorable. Squealer has ?very round cheeks, twinkling eyes, nimble movements, and a shrill voice.? He is also ?a brilliant talker? who is talented in the art of argument. The other pigs say Squealer ?could turn black into white?, When Squealer masks the evil intentions of the pigs, the intentions can be carried out with little resistance and without political disarray. Squealer could be closely correlated with the ?Pravda?, the Russian newspaper of the 1930s. Propaganda was a key to many publications, and since there was no television or radio, the newspaper was the primary source of media information. So the domination of the ?Pravda? was seized by Stalin and his new Bolshevik regime. ...read more.

As ?Squealer; is closely correlated with the ?Pravda? by his cunning and intellectual ways which subsequently persuade the people of the farm (or of Russia) and ?Squealer? does as the ?Pravda? did, he distorts the fact a little to his own advantage, in order for everything to sound like it is in favour of the animals (or the people of Russia). Orwell introduces us to character of ?Boxer? also in chapter two. ?Their most faithful disciples were the two cart horses, Boxer and Clover.? From just the word ?Most?, the reader immediately finds out that there are suggested hierarchy levels, by Orwell, telling us immediately that the animals are not all equal, as are first made out to be. Furthermore, the word ?most? is a superlative. In addition, from the words ?faithful disciples? , it gathers an assumption amongst the reader, that animalism, is somewhat like a religion, that has disciples, that are faithful towards, their faith. Furthermore, in order to have disciples you need to have a leader which brings up additional arousing suspicion; that in order to have a leader, the animals must not all be equal, therefore, their ?commandments? were somewhat pointless. Boxer plays an important role in ?Animal Farm?, his constant obeying of Napoleon, yet not listening to common sense, kept him working harder ...read more.

that ever use their brains, and without them , they will now survive, when actually it is the complete opposite, and life would be much more enjoyed for the animals without the pigs. He wants the readers to learn how selfish the pigs (?Squealer?) was, and how they manipulated each and every animal and lied to them, changed every rule, so that they could live the best life, they created levels of hierarchy, and destroyed the pigs minds, as well as betraying their own fellow animal, which broke one of the very rules that they made. Orwell wanted the reader to see how much the ?Pravda? influenced the people into believing the leaders. ?Boxer? and ?Squealer? both had very major roles, which you could say were both complete opposites. ?Squealer? for one betrayed every animal on the farm, and little did he know he was also doing the dirty work of the pigs for them. ?Boxer? was a huge influence on all the other animals, and his dedication, determination and stupidity determined the success of the pigs(of Stalin) If only animals such as ?Benjamin? stood up and said something, the revolution would have never happened, but ?Benjamin?, representing skeptical people in Russia, chose to ignore everything that was happening around him, and let the horrors and suffering continue. ...read more.