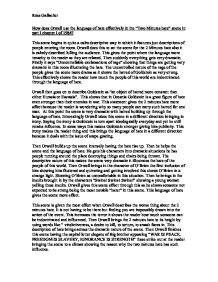 How does Orwell use the language of hate effectively in the &quot;Two Minutes hate&quot; scene in part I chapter I of 1984

How does Orwell use the language of hate effectively in the "Two Minutes hate" scene in part I chapter I of 1984? This scene begins in quite a calm descriptive way in which it features just descriptions of people entering the room. Orwell does this to set the scene for the 2 Minutes hate also it is calmly described lulling the audience. This gives the point where the language more tenacity to the reader as they are relaxed. Then suddenly everything gets very dramatic. Firstly it says "Uncontrollable exclamations of rage" showing that things are getting very dramatic in this room illustrating the hate. The uncontrolled nature of the rage of the people gives the scene more drama as it shows the hatred of Goldstein as very strong. ...read more.

At this point the scene is very dramatic with hatred building up through the language of hate. Interestingly Orwell takes this scene in a different direction bringing in irony. Saying the irony is Goldstein is torn apart ideologically everyday and yet he still retains influence. In some ways this makes Goldstein stronger giving him publicity. This irony makes the reader thing and this brings the language of hate in a different direction because it deals with the issue of scape goating. Then Orwell builds up the scene intensely having the hate rise up. Then he helps the scene and the language of hate. He gets his characters into dramatic situations he has people running around the place destroying things and chairs being thrown. ...read more.

This language of hate gives the scene more effect. This scene is given the most effect when Orwell describes the worse thing about the 2 minutes hate. It is not having to be there but finding you are impossibly drawn into the action of the event. This increases the terror it shows the reader how much someone can be indoctrinated and influenced. Then Orwell brings the 2 minutes hate to its height by using words like " vindictiveness, a desire to kill, to torture, to smash faces in. This description of hate brings across the dramatic nature of the scene. Then Orwell finishes this scene having the capital letter slogans of Big brother appearing "WAR IS PEACE, FREEDOM IS SLAVERY, IGNORANCE IS STRENGTH" these strike out at the reader bringing the scene to a climax showing the reason why the two minutes hate has such influence. Ross Gallacher ...read more.

This essay responds averagely to the task. There is some appreciation of the techniques Orwell uses to build a culture of hate in the two minutes silence, but there is no real discussion of the effect this has. It ...

This essay responds averagely to the task. There is some appreciation of the techniques Orwell uses to build a culture of hate in the two minutes silence, but there is no real discussion of the effect this has. It is vital to discuss the effect beyond "this language of hate gives the scene more effect" to gain the top marks, as it shows a thorough understanding of why Orwell has used the techniques.

The analysis in this essay is sound, but I would've liked more close textual exploration. For example the essay picks up how Orwell uses "words like 'vindictiveness, a desire to kill, to torture, to smash faces in'" yet there is no exploration of the connotations these words have. I would be looking at the violence and how the word desire makes it seem inherent in society. The word vindictive has undertones of being unreasonable, which increases the terror that the society is full of hatred for no reason. That sort of analysis is what examiners are looking for, especially when the question explicitly asks for language exploration. There is some awareness of the reader response here, but I think this could be a more prominent focus throughout. For example "this irony makes the reader think" just seems like an afterthought, whereas it should be the bulk of discussion to why Orwell creates this hate. I liked how this essay writes about Orwell's constructions, rather than writing as if they are real. For example saying "Orwell builds up the scene intensely" rather than saying "The scene builds up intensely" shows the sharp focus on Orwell manipulating his language for a reason. This is the sort of style which examiners will look favourably on in my experience.

The structure here isn't brilliant. There is no introduction posing a clear argument, and there is no conclusion to weave ideas together and leave with a strong justified judgement. Essays at GCSE level are marked for their ability to form a structured argument, and this would've been penalised as it's just a collection of points. The signposts to each paragraph are clear, but I'm not a big fan of going through a chapter chronologically. Phrases such as "and then" don't come across sophisticated, and it forces you to collect the best techniques and write about them in unison. There are sometimes errors in spelling, punctuation and grammar and this could be fixed with a quick proof-read.