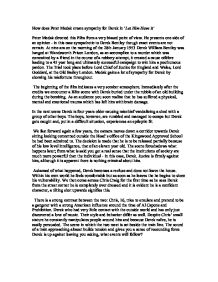 How does Peter Medak create sympathy for Derek in 'Let Him Have it' Peter Medak directed this Film from a very biased point of view. He presents one side of an opinion - in this case sympathetic to Derek Bentley though exact events are not certain. At nine am on the morning of the 28th January 1953 Derek William Bentley was hanged at Wandsworth Prison London, as an accomplice to a murder which was committed by a friend in the course of a robbery attempt, it created a cause c�l�bre leading to a 45 year long and ultimately successful campaign to win him a posthumous pardon. The Trial took place before Lord Chief of Justice for England and Wales, Lord Goddard, at the Old Bailey London. Medak gains a lot of sympathy for Derek by showing his misfortune throughout. The beginning of the film indicates a very somber atmosphere. Immediately after the credits we encounter a Blitz scene with Derek buried under the rubble of an old building during the bombing. As an audience you soon realize that he has suffered a physical, mental and emotional trauma which has left him with brain damage. In the next scene Derek is four years older causing mischief vandalizing a shed with a group of other boys. The boys, however, are rumbled and managed to escape but Derek gets caught and, put in a difficult situation, experiences an epileptic fit. We fast forward again a few years, the camera moves down a corridor towards Derek sitting looking concerned outside the Head's office of the Kingswood Approved School he had been admitted to. ...read more.

Following this we see Chris's brother struggling in a feud with the police. After seeing his brother trying to shoot his way out of arrest it's as if it is no longer a game for Chris and he is hardened by the episode as his brother is sentenced to twelve years imprisonment. His right hand man however is not charged which leads you to think Derek's fate would be the same in just such an occurrence. Bentley does try to resist the lure of the gang but is drawn back, as he goes to see Chris there is a establishing shot on Derek to show empowerment on his part (he had obtained the key to the butcher where he had been humiliated a number of times). At this point Chris appears at his weakest. We are reminded of his adolescence wearing his PJ'swith toy cars and a gun on his bedside table. Derek and the gang join forces once again; the camera lingers on Derek signifying that is not entirely sure what he is up against, whereas the camera looks up at Chris trying to exert his power. By this point Derek is in a black coat like the others, perhaps to suggest he is no longer an outsider. Their plan to rob the butchers doesn't materialize so Chris and Derek attempt to break into Barlow and Parker (confectionary wholesale and manufacturer warehouse) via the roof. The camera looks down on Derek once again and up at Chris as he shouts from above. ...read more.

Once again he displays his mental age in saying will it hurt there is a strong sense of poignancy about it. Derek's father goes to Parliament to appeal with a petition however they were not allowed to discuss Bentley's sentence until it had been carried out. In a bird's eye view shot we find Derek's farther pacing up and down in a large space awaiting the MP's decision. By this point nothing can be done. The picture fades to the next scene where one of the guards is scribing for Derek in a letter, as he attempts to sign the letter we recognize he is left handed considered clumsy at the time and different, considering he is shown as very right sided at the beginning of the film. Derek's is shown to be understandably emotional but shows maturity, he had heart but not the judgment. There is a long establishing shot of Bentley's street signifying morning which in tern is quite and peaceful. In the Penultimate scene the camera tracks down the stairs of the house into the living room with the clock on the mantelpiece getting louder and louder as it nears nine o'clock the time of execution. The speed in which it takes place is quite dramatic! along with it is a sense of finality. The story is controversial, because Medak has chosen a topic which had been familiar with the public not so long ago. The end sequence suggests that justice is a blunt instrument and the film in its entirety raises the question of capital punishment the incorrect decisions, the dangers and whether it should be abolished. ...read more.