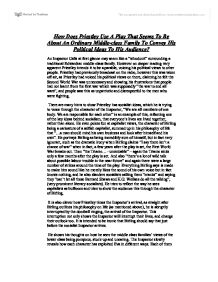 How Does Priestley Use A Play That Seems To Be About An Ordinary Middle-class Family To Convey His Political Ideas To His Audience?

How Does Priestley Use A Play That Seems To Be About An Ordinary Middle-class Family To Convey His Political Ideas To His Audience? An Inspector Calls at first glance may seem like a "whodunit" surrounding a traditional Edwardian middle-class family. However on deeper reading very apparent Priestley intends it to be a parable, voicing his political views to other people. Priestley had previously broadcast on the radio, however this was taken off air, as Priestley had voiced his political views on there, claiming he felt the Second World War was unnecessary and showing his frustrations that people had not learnt from the first war which was supposedly "the war to end all wars", and people saw this as unpatriotic and disrespectful to the men who were fighting. There are many hints to show Priestley has socialist ideas, which he is trying to voice through the character of the Inspector, "We are all members of one body. We are responsible for each other" is an example of this, reflecting one of the key ideas behind socialism, that everyone's lives are lived together, rather than alone. He even pokes fun at capitalist views, the character of Birling being a caricature of a selfish capitalist, summed up in his philosophy of life that "...a man should mind his own business and look after himself and his own". He portrays Birling as being incredibly sure of himself, but in fact very ignorant, such as the dramatic irony when Birling claims "I say there isn't a chance of war" when in fact, a few years after the play is set, the First World War breaks out. ...read more.

Birling was one of the chairwomen of a charity committee- "we've done a great deal of useful work in helping deserving cases". This becomes both ironic and hypocritical after the story of the treatment of one less fortunate girl by the family unravels. The family are not generous and kind with money as being on a charity committee would suggest. Mr Birling is very tight with his money, and is unwilling to increase some of his workers pay by a very small amount "...if I'd agreed to this demand for a new rate we'd have added about twelve percent to our labour costs." This again reflects the selfishness Priestley sees in the capitalist attitude to life. This is not the only time however, that money is brought in to the situation by Birling. He also states "Look, Inspector- I'd give thousands- yes thousands-" to fix the situation, showing in no circumstances can he, or the capitalist class he represents, think of a situation in terms of anything other than self-gain and money. The family, especially the elders, obviously have a very clear idea, and have almost kidded themselves all of the upper middle class of the town are completely respectable and upstanding, generous people. In fact it comes to light that one of the prominent members of the upper middle class community, Alderman Meggarty is "a notorious womanizer as well as being one the worst sots and rogues in Brumley", and on top of that Eric turns out to be an alcoholic, and Gerald to have had an affair. ...read more.

The older members don't seem to be able to learn, the second they think they're out of the woods they stop worrying, forget what they've been told and even begin to poke fun at the Inspector. They have learnt absolutely nothing, with Sheila even saying "That's just what I feel Eric, and what they don't seem to understand". All the older members seem to care about is their reputation. Soon after the Inspector leaves, Birling exclaims "Most of this is bound to come out. They'll be a public scandal." This conveys the fact that, even at the end of the play, after the Inspector's visit most of the family members, particularly the older members, are still self-centred and missing the point as they were before. The Inspector says "We often do on the younger ones. They're more impressionable", meaning younger people learn better, showing Priestley has hope for the younger generation as the future. It is clear through-out this play that Priestley is voicing Socialist ideas, and trying to make others see, agree and believe them. The family are intended to represent the Capitalist upper middle class, in what Priestley sees as their "true light". Even the stage directions ask for the light to be sharper and brighter when the Inspector arrives. This shows Priestley thinks the Inspector sees the world clearer and in a 'better light' and that he has come to 'shed light' and understanding on the family, and through them helping others look deeper into Capitalism, in ways which other people viewing the play may not have realised. ...read more.