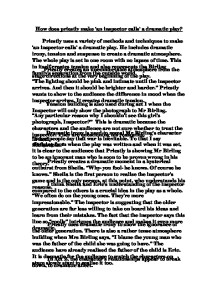 How does priestly make 'an inspector calls' a dramatic play?

How does priestly make 'an inspector calls' a dramatic play? Priestly uses a variety of methods and techniques to make 'an inspector calls' a dramatic play. He includes dramatic irony, tension and suspense to create a dramatic atmosphere. The whole play is set in one room with no lapses of time. This in itself creates tension and also represents the Birling family's separation from the outside world. Priestly creates an uncomfortable atmosphere from the stage directions at the very beginning of the play. "The lighting should be pink and intimate until the inspector arrives. And then it should be brighter and harder." Priestly wants to show to the audience the difference in mood when the inspector arrives. It creates dramatic tension. Tension building is also used during act 1 when the Inspector will only show the photograph to Mr Birling. "Any particular reason why I shouldn't see this girl's photograph, Inspector?" This is dramatic because the characters and the audience are not sure whether to trust the inspector. They are questioning his reasoning. Dramatic irony is used to reveal Mr Birling's character in Act1. "Some people say that war is inevitable. ...read more.

The audience have already realised the father of the child is Eric. It is dramatic for the audience to watch the characters on stage slowly start to realise it too. In Act 2, the character's relationships appear to break down, to dramatic affect. "I think you'd better take this with you." Sheila giving back Gerald the ring confirms the breakdown of their relationship. The audience empathises with Sheila, which separates Gerald more from the younger, more sympathetic, generation to the side of Mr and Mrs Birling. This increases the tension amongst the characters. At the end of each act, Priestly creates a dramatic cliff hanger to intrigue the audience. This is often done in the stage directions. "We hear the front door....Eric enters.....he meets their enquiring stares." The audience do not know what will happen next, but they, and the characters, do know that Eric is the father of the baby. All suspect that trouble will follow. There is a strong sense of tension building. The breakdown of relationships continues into act 3. ...read more.

The shortness and simplicity, in my opinion, increases the power and dramatic effect of this line. The other characters are relieved and start to be lulled into a false sense of security. This sense of security is abolished when Priestly uses a powerful aural effect to surprise the characters and the audience. "The telephone rings sharply. There is a moment of complete silence." The moment of silence creates huge tension on the stage; no-one knows what the call is about, but the family is aware it is probably not good news. The audience is fully aware that the phone call will bring bad news. This adds to the overall dramatic effect of the phone ringing. Throughout the play Priestly uses a variety of techniques to make it dramatic. He uses cliff hangers and long pauses to create tension and suspense. He uses the breakdown of the character's relationships to show the profound effect of the inspectors visit on the Birlings. Priestly uses very specific stage directions right through the play to create tense and dramatic atmospheres. Priestly also uses sounds such as doorbells and telephones to surprise and stun the audience. All of these techniques, and more, come together to make 'An inspector calls' a very dramatic play. ...read more.

There are some good points made in this essay but some of the ideas are too brief and not explored in enough detail. Try to make links and comparisons to show that you are able to range around the text and understand the point within the whole context of the play.