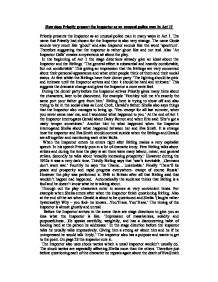 How does Priestly present the inspector as an unusual police man in Act 1?

How does Priestly present the inspector as an unusual police man in Act 1? Priestly presents the Inspector as an unusual police man in many ways in Act 1. The name that Priestly had chosen for the Inspector is also very strange. The name Goole sounds very much like `ghoul' and also Inspector sounds like the word `spectrum'. Therefore suggesting that the inspector is rather ghost like and not real. Also `An Inspector Calls' creates a mysterious air about the play. In the beginning of Act 1 the stage directions already give an ideal about the Inspector and the Birlings. `The general effect is substantial and heavily comfortable, but not comfortable' This giving an impression that the Birlings are very concerned about their personal appearance and what other people think of them and their social status. At first whilst the Birlings have their dinner party `The lighting should be pink and intimate until the Inspector arrives and then it should be hard and intimate.' This suggests the dramatic change and gives the Inspector a more eerie feel. During the dinner party before the Inspector arrives Priestly gives many hints about the characters, later to be discovered. ...read more.

Before the Inspector arrives in the scene there are stage directions to give you an idea what the Inspector is like. `Impression of massiveness, solidity and purposefulness...He speaks carefully, weightily, and has a disconcerting habit of looking hard at the person he addresses.' In the stage direction before the inspector talks he usually talks impressively. Giving him a strong air about him and he if he unimpressed he would talk `dryly.' The inspector also has a purpose and wants to get to the point. On page 23 the inspector cuts in. The Inspector also uses shock tactics which a usual inspector wouldn't usually do. The shock tactics are especially affecting Shelia more than the others. Therefore just before questioning each of the character he repeats again about the death of Eva Smith. `Swallowed a lot of strong disinfectant. Burnt her inside out... Suicide of course.' The inspector repeats what happened to Eva Smith to Shelia more than the others. He also mentions that Eva Smith was very pretty making Shelia even more uncomfortable and guilty. However it links in to what happened to Eva Smith at Milwards when Shelia didn't like her and had her sacked because she was pretty. ...read more.

In some cases he doesn't even show the picture to Gerald as Gerald assumes he know who the inspector is talking about. This may suggest is the inspector really showing everyone the same photo or are they different pictures, making the Inspector even more mysterious than he is. The inspector also manages to make the character confess what they did to Eva Smith playing a part to her death. For example Shelia confessed everything that had happened. Overall I feel that the Inspector isn't a real Inspector but the characters conscience. In other plays Priestley has written they are usually time plays. During the time the Inspector came to inspect nothing else had happened outside the Birlings living room. In the end of the play they are all together where they started of in the beginning of the play. Therefore what wrong they had done wouldn't mean that it was done to the same girl as they weren't allowed to see the picture at the same time. Priestly also presents a main theme in the play that we should care for each other. In the end the only reason why Eva Smith or Daisy Renton committed suicide was because no one cared or helped her. ...read more.