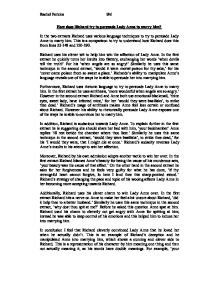 How does Richard try to persuade Lady Anne to marry him?

How does Richard try to persuade Lady Anne to marry him? In the two extracts Richard uses various language techniques to try to persuade Lady Anne to marry him. This is a comparison to try to understand how Richard does this from lines 33-148 and 150-190. Richard uses his clever wit to help him win the affection of Lady Anne. In the first extract he quickly turns her insults into flattery, exchanging her words 'when devils tell the truth!' For his 'when angels are so angry!' Similarly he uses this same technique in the second extract, 'would it were mortal poison for thy sake,' for his 'never came poison from so sweet a place.' Richards's ability to manipulate Anne's language reveals one of the ways he is able to persuade her into marrying him. ...read more.

In addition, Richard is audacious towards Lady Anne. To explain further in the first extract he is suggesting she should share her bed with him, 'your bedchamber' Anne replies 'ill rest betide the chamber where thou liest.' Similarly he uses this same technique in the second extract, 'would they were basilisks', to strike thee dead,' for his 'I would they were, that I might die at once.' Richard's audacity reverses Lady Anne's insults in his attempt to win her affection. Moreover, Richard by his own admission adopts another tactic to win her over. In the first extract Richard blames Anne's beauty for being the cause of his murderous acts, 'your beauty was the cause of that effect.' On the other hand in the second extract he asks for her forgiveness and he feels very guilty for what he has done, 'if thy revengeful heart cannot forgive, lo here I lend thee this sharp-pointed sword.' ...read more.

Before he asked this question Anne spat at him. Richard used his charm to cleverly not get angry with Anne for spitting at him; instead he was able to keep control of his emotions and this helped him to induce her into marrying him. In conclusion I feel that Richard cleverly convinced Lady Anne that he loved her when he actually didn't. This is an example of Richard's deception and he manipulated Anne into marrying him, which shows a cunning and clever side to Richard. This is a representation of his character by him meaning one thing and then not actually meaning it, as his words have double meanings. For example, 'your beauty, that did haunt me in my sleep.' Also, Lady Anne accepted him because she was at a vulnerable stage and felt that she needed some protection from a man. Rachel Perkins 9M ...read more.