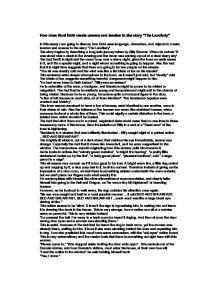 How does Roal Dahl create unease and tension in 'The Landlady'

How does Roal Dahl create unease and tension in the story "The Landlady" In this essay I am going to discuss how Dahl uses language, characters, and objects to create tension and unease in the story "The Landlady". The story begins by describing a long train journey taken by Billy Weaver. When he arrived "it was about nine o clock in the evening and the moon was coming up out of a clear starry sky". The fact that it is night and the moon is up over a starry night, gives the town an eerie sense to it, as if it's a special night, and a night where something is going to happen. Also the fact that it is night-time suggests that there are going to be few people on the streets. "The air was deadly cold and the wind was like a flat blade of ice on his cheeks". This sentence adds deeper atmosphere to the town, as it wasn't just cold, but "deadly" cold. The blade of ice, suggests something harmful, dangerous might happen to him. "He had never been to Bath before". "Billy was seventeen" He is unfamiliar of the area, a foreigner, and therefore might be prone to be misled or misguided. The fact that he is relatively young and inexperienced might add to the chance of being misled. ...read more.

However, as the story develops you feel that the landlady is pretending this, in order to hold back something from Billy. This adds to the unease of the story. "He noticed that the bedspread had been taken off the bed, and that the bedclothes had been neatly turned back on one side. All ready for someone to jump in." The reader starts to feel that everything is too perfect and the fact everything seems pre-prepared makes it seem unnatural and unusual to the reader. "We don't want to go breaking any laws at this stage" she said. This suggests that laws will be broken at some time of Billy's stay. It seems that the landlady is almost performing a ritual, with different stages. She has performed this ritual before, and wants to get it exactly correct. "The fact that his landlady appeared to be slightly off her rocker, didn't worry Billy in the least. After all, she was not only harmless - there was no question about that -" The fact that Billy has no doubts about his landlady, means that he is off guard and vulnerable. This line is also very ironic as the reader finds out later in the story. "The fire was glowing in the hearth, and the little dachshund was still sleeping in front of it." ...read more.

The cute curled up little dachshund was also a stuffed animal "perfectly preserved". To the reader this is quite disgusting, and we finally find out what was wrong with the 'too good to be true, cosy picture' encountered at the beginning of the story. The reader is quite shocked by this discovery, however Billy thinks it's "absolutely fascinating". He still doesn't suspect anything sinister about the landlady, even after her hinting little comment: "I stuff all my little pets myself when they pass away." "You did sign the book, didn't you?" "That's good. Because later on, if I happen to forget what you were called, then I can always come down here and look it up." The reader feels that what the landlady is really trying to say, is that when I've stuffed you and put you upstairs, then I can come down and remember your name. Towards the end of the story, the reader feels angry that Billy hasn't realised what danger he is in, and the reader feels like shouting at him for being so ignorant. This adds to the extreme tension of the story. "Haven't there been any other guests here except them for the last two or three years?" "No, my dear," she said. "Only you." The story concludes with just as much tension as before. The landlady finishes off with a sinister line, and the reader, is inclined to imagine and predict the fate of Billy, now in the dreaded hands of the landlady. ...read more.