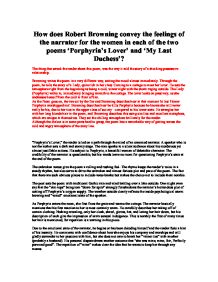 How does Robert Browning convey the feelings of the narrator for the women in each of the two poems 'Porphyria's Lover' and 'My Last Duchess'?

How does Robert Browning convey the feelings of the narrator for the women in each of the two poems 'Porphyria's Lover' and 'My Last Duchess'? The thing that struck the reader about this poem, was the way it told the story of a shocking possessive relationship. Browning writes the poem in a very different way, setting the mood almost immediately. Through the poem, he tells the story of a Lady, quite rich in her class. Coming to a cottage to meet her lover. He sets the atmosphere right from the beginning as being a cold, winter night with the storm raging outside. The Lady (Porphyria) walks in, immediately bringing warmth to the cottage. The lover looks on passively, as she undresses herself from the cold in front of him. As the Poem goes on, the two sit by the fire and Browning describes how at that moment 'at last I knew Porphyria worshipped me'. Browning describes how he kills Porphyria because he knows she will never really be his, due to her ties in the upper class of society - compared to his lower state. He strangles her with her long blonde hair in the poem, and Browning describes this using similies and excellent metaphors, which are unique in themselves. ...read more.

It sounds as though he is trying to convince himself of this false statement. This obsessive repetition serves more to make the readers unsure about this claim than to reassure them of its real truth. As they sat in his morbid display throughout the night, the reader is left with the assurance of his actions because "God has not said a word!". As shocking as this poem may be, it also makes some sober points. The author chooses to destroys the absolute credibility of the narrator. Browning allows the readers to look into a situation they would otherwise prejudge from a totally different perspective. The average reader would automatically reject a person who strangles his lover without really attempting to see the situation from the jealous lover's point of view. With this poem, Browning allows the readers to slip into a channel of thought and then violently jerks them out with a murder. The voice of the narrator is what makes this poem a unique and interesting. The poem "My Last Duchess" shows the Duke's lack of moral character. This is illustrated by his need for control, his jealousy, and in his view of his last Duchess as a possession. ...read more.

As the new duchess takes her place as one of many in the line of objects; he calls an art collection. In his two poems "Porphyria's Lover" and "My Last Duchess," Browning uses the theme of possessiveness that dominates each poem. First, both men view their lovers as though they were mere objects. In PL, Porphyria is strangled in order that her lover can create a statue-like corpse that would hold a particular look in her eyes that "laughed...without a stain" forever. In MLD, the Duke reduces his wife to a portrait, a possession where he can display her whenever and wherever he wishes, "[l]ooking as if she were alive." Second, both men murder their lovers as though the women were without a freewill. In PL, the lover kills Porphyria after he thinks that she should not have enjoyed "tonight's gay feast" from which she returned. In MLD, the Duke kills his wife, because she was kind and gave "who passed without / Much the same smile." Third, both men fail to show any remorse as though their lovers were disposable. In PL, the lover sits with the dead Porphyria and remarks that "God has not said a word" about the murder. In MLD, the Duke is able to negotiate a deal for a new Duchess, while he speaks calmly about his last wife, of whom he "gave command; / Then all smiles stopped together." ...read more.