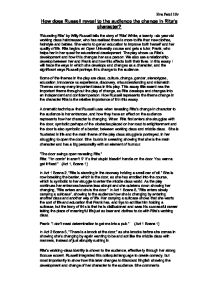 How does Russell reveal to the audience the change in Rita's character? 'Educating Rita' by Willy Russell.

How does Russell reveal to the audience the change in Rita's character? 'Educating Rita' by Willy Russell tells the story of 'Rita' White, a twenty-six year old working class hairdresser, who has realised there is more to life than new clothes, hairstyle and babies. She wants to get an education to improve both herself and her quality of life. Rita begins an Open University course and gets a tutor, Frank, who helps her in her quest for educational development. The play shows us Rita's development and how this changes her as a person. We also see a relationship develop between her and Frank and how this affects both their lives. In this essay I will trace the ways in which she develops and changes as a character, and the significant ways Russell portrays this change to the audience. Some of the themes in the play are class, culture, change, gender, stereotypes, education, innocence vs experience, discovery, misunderstanding and mismatch. Themes convey many important ideas in this play. This essay title examines the important theme throughout the play of change, as Rita develops and changes into an independent and confident person. How Russell represents the theme change in the character Rita is the relative importance of it in this essay. A dramatic technique that Russell uses when revealing Rita's change in character to the audience is her entrances, and how they have an effect on the audience represents how her character is changing. When Rita first enters she struggles with the door, symbolic perhaps of the obstacles placed on her road to enlightenment and the door is also symbolic of a barrier, between working class and middle class. She is frustrated in life and the main theme of the play class struggle is portrayed, in her struggling to open the door. She bursts in swearing showing that she is the main character and has a big personality with an element of humour. "The door swings open revealing Rita." Rita: "I'm comin' in aren't I? ...read more.

Rita: "She said, 'we could sing better songs than those', that's why I came back. (Act 1, Scene 7) Her mother knows that there is more to life than what they are doing, unlike Denny who is completely fulfilled with his life. We can also see that her mother once shared the same dream as her and wants a better life. This is why this scene is a turning point in her development and she goes back to education, to get a better life, therefore doesn't want to give up the course and is more determined then ever to get an education. Rita is indicating that she doesn't want to remain with the values and choices that those within her family are satisfied with. Education is the only way Rita can fulfil her desire to overcome the working class background she has been born into. Russell uses Frank deliberately as a way of showing how Rita is changing. At the beginning of the play he was uninterested in teaching her as he prejudged her to be like his other dreary students, "...some silly woman's attempt to get into the mind of Henry James" (Act 1, Scene 1), but this changes to when he sees her true self and describes her as, "a first breath of fresh air," showing how he has grown fond of her and he thinks of her to be unique to what he's used to. He likes the fact that Rita doesn't have high expectations of him unlike the other students. She shows him how eager and determined she is to learn. It also shows her innocence and freshness at the beginning of the play. From Frank's point of view at first he clearly thinks of her in a rather superior way, but comes to realise that for all her crudity she is a far more 'authentic', 'alive' person than he is, and someone to be admired. ...read more.

She re-adopts her colloquial working class language in the final scene showing how she is not critical or ashamed of her working class roots, showing that she hasn't forgotten them, "He's a bit of a wanker really." By the final scene she realises that her high expectations can't all be fulfilled. She realises that some of her changes in character are false and realises that being middle class isn't everything and she can't be completely fulfilled by being middle class, as seen by her changing attitude to Trish. Rita knows that the value of education goes far beyond simple intellectual enlightenment. She realises that she now has choices to do what she wants, "I had a choice. I chose to do the exam." (Act 2, Scene 7) She finishes achieving her goals and the audience see this, as mentioned before, by the dress she receives from Frank and also is seen in the extreme increase of her self-esteem. At the end of the play Rita has turned from an old fashioned girl to a modern, independent young woman, who thinks and acts for herself. She was determined to control her own life and make her own choices, using education to do this and achieved it by the final act. In conclusion from the evidence it would seem apparent that Russell reveals to the audience her change in character, in her changes in entrance in the scenes, which settle down and become less abrupt. Also her speech and language change to being less direct and like her entrances settle down. Also indirectly symbols, which are repeated throughout the play, link in with all these key points revealing this change in character. Also Frank's response to this change and her behaviour changes in that she changes her name, job, and attitudes reflecting this. The audience see how much she has changed by the end in all these ways. Education entirely changes Rita, which though she is prepared for a change, affects her life enormously. Eva Patel 10v ...read more.