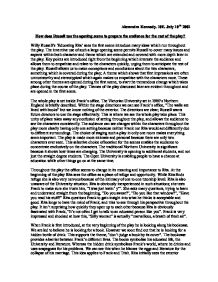 How does Russell use the opening scene to prepare the audience for the rest of the play?

Alexandra Kennedy. 10E. July 10th 2002 How does Russell use the opening scene to prepare the audience for the rest of the play? Willy Russell's 'Educating Rita' sees the first scene introduce many ideas which run throughout the play. The inventive use of such a large opening scene permits Russell to cover many issues and aspects within both character and theme which are extended and covered with more depth later in the play. Key points are introduced right from the beginning which interests the audience and allows them to empathise and relate to the characters quickly, urging them to anticipate the rest of the play. Russell allows us to make conceptions and conclusions about the two characters, something which is covered during the play; A theme which shows that first impressions are often untrustworthy and stereotypical which again makes us empathise with the characters more. These among other themes are opened during the first scene, to start the tremendous change which takes place during the course of the play. Themes of the play discussed later are evident throughout and are opened in the first scene. The whole play is set inside Frank's office. The Victorian University set in 1980's Northern England is briefly described. Within the stage directions we can see Frank's office, "The walls are lined with books" but we know nothing of the exterior. The directions are clear; Russell wants future directors to use the stage effectively. This is where we see the whole play take place. This unity of place takes away any confusion of setting throughout the play, and allows the audience to see the characters consistently. The audience can see changes within the characters throughout the play more clearly having only one setting because neither Frank nor Rita would act differently due to different surroundings. The choice of staging such a play in only one room makes everything seem important. ...read more.

Here Russell uses Rita and her situation to convey the attitudes of the working classes at the time of the play. The way Russell describes their attitudes through Rita shows they aspire to nothing more than their parents average lives; just going through life without taking chances or ceasing opportunities. Throughout the play we see Rita using her own mind to make decisions and follow her dreams. Rita becomes decisive and confident about her thoughts, whereas before she wasn't certain about her feelings. She was conscious of getting things wrong. Rita has learnt to appreciate her mind, and has also seen people appreciate it as well. This is expanded in the film version to show the audience how much Rita is changing, because she gets stopped by some students sat on the lawn, and asked to join their conversation about literature. This is one of Rita's dreams and so helps the audience to see her progressive change. Rita works hard on aspects which she thinks are important, but later comes to realise that most of the things she thought she needed to change were in fact very strong positives about her character. Rita's optimism and lack of cultural education leads her to think narrowly about things. Rita's desire to be open minded is eventually fulfilled and is helped because of the way her mind worked to begin with. Rita sees her faults and knows where and why she wants to improve on them. She is hard working and enthusiastic, "I wanna know everything!" When Rita first sees the picture hanging on Frank's wall she comments on it very decisively. "It's very erotic", this is a great example of how Russell uses the opening scene to prepare the audience. Rita later on in the play would never have said with something like that. She would have thought a lot more about it. We can see this again where she restricts herself in the final exam on the question about Peer Gynt, originally she had written "Do it on the Radio". ...read more.

After the first scene the audience will have judged and categorised Frank and Rita. They are then able to see how their views change when the play ends. The roles of each character are reversed in the first and final scenes. In the first scene Rita is starting her new life, and in the final Frank is also starting his. We can see through Frank's situation that the type of education you receive at University isn't the key to happiness. It is the education you receive throughout your life; an education which allows you to make decisions, which enables you to follow your dreams and believe in yourself. The title, 'Educating Rita' can be interpreted in different ways. It has different meanings; it can reflect what Frank has taught Rita, along with, Rita the educator. This is the education which Rita taught Frank. She taught him that you need not only a degree or money, you need to desire to be who you want to be, and have the power and drive to become who you want to become. We can see that Frank is changing because at the end of the play, when he is packing up for Australia we see drink bottles on top of his bookcase. Frank is finally dealing with his problems, and bringing them out into the open. Frank is still learning even at the end of the play. Rita has influenced him a great deal and she has surfaced life altering truths. This is what enabled Rita to achieve her goal. Rita finally manages to give Frank a haircut which really emphasises the change in Frank; and also shows us that Rita isn't ashamed of where she's come from. The play showcases what can happen if you are positive, and what can happen if you are negative. It is heart lifting for those willing to learn and listen, through their own mistakes and others. However it is a lesson to those who sit back and let things pass them by. ...read more.