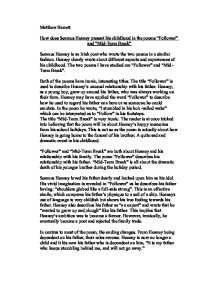 Matthew Barrett How does Seamus Heaney present his childhood in the poems "Follower" and "Mid-Term Break" Seamus Heaney is an Irish poet who wrote the two poems in a similar fashion. Heaney clearly wrote about different aspects and experiences of his childhood. The two poems I have studied are "Follower" and "Mid-Term Break". Both of the poems have ironic, interesting titles. The title "Follower" is used to describe Heaney's unusual relationship with his father. Heaney, as a young boy, grew up around his father, who was always working on their farm. Heaney may have applied the word "Follower" to describe how he used to regard his father as a hero or as someone he could emulate. In the poem he wrote, "I stumbled in his hob-nailed wake" which can be interpreted as to "Follow" in his footsteps. ...read more.

This is an effective simile, which compares his father's physique to a sail of a ship. Heaneys use of language is very childish but shows his true feeling towards his father. Heaney also describes his father as "an expert" and wrote that he "wanted to grow up and plough" like his father. This implies that Heaney's ambition was to become a farmer. However, ironically, he eventually became a poet and rejected the family trade. In contras to most of the poem, the ending changes. From Heaney being dependent on his father, their roles reverse. Heaney is now no longer a child and it his now his father who is dependent on him, "It is my father who keeps stumbling behind me, and will not go away." ...read more.

A poppy is a symbol of sadness and death and sometimes represents war, whereas the colour red can be looked upon as the colour of blood. This was an effective metaphor that showed the violence and pain of the event. Throughout the poem "Mid-Term Break," Heaney uses a set structure of three lines a verse, with none of the verses rhyming. At the very end of the poem, there is a single line. As well as that, Heaney combined the last two lines as rhyming couplets. He does this to really emphasise the last two lines: "No gaudy scars, the bumper knocked him clear, suggesting how quick and cold it was. A four foot box, a foot for every year." This is explaining how young and innocent the child was. Both of the poems show how Heaney grew up having quite a sad childhood. ...read more.

This is a fairly insightful essay that comes complete with a couple of interesting analytical points, some of which are perfunctory and others which are slightly more interesting. The language analysis is the most prevalent here, as it to be ...

This is a fairly insightful essay that comes complete with a couple of interesting analytical points, some of which are perfunctory and others which are slightly more interesting. The language analysis is the most prevalent here, as it to be expected of a Heaney poem, but that isn't to say imagery can't be analysed. Both are given equal consideration here and this balance will be noted and appreciate by examiners. The contextual analysis isn't very strong and is more based on personal guesswork than actual facts so by quite some way there's work to do there in order to ramp up the marks for understanding context. Otherwise this is a competent answer with some good analysis.

The analysis shown here is indicative of a B grade candidate for GCSE. There is a good approach to language and image analysis, though some comments are vague and could be greatly elaborated on because they feel like they're going to, but never actually go anywhere. For instance - the comments about the childhood naivete of Heaney - why does he do this? what type of writing style has he used and why? These need to be taken into consideration for all language analysis is real depth is to be achieved. The question focus is faint but consistently so. There is a fair mentioning of the overall tone about his childhood throughout, but it is perhaps not quite appropriate to suggest it was all negative. After all, aspiration and admiration and not quite so sour as jealousy and envy. Just be a little careful in your choice of words when concluding your analysis.

The Quality of Written Communication is fine. There is a good level of control exhibited in the forming of the analysis and there is no cause for concern with regard to spelling, punctuation or grammar.