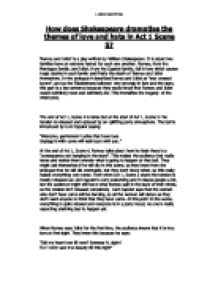 How does Shakespear dramatise scenes of love and hate in Act 1 Scene 5?

How does Shakespeare dramatise the themes of love and hate in Act 1 Scene 5? 'Romeo and Juliet' is a play written by William Shakespeare. It is about two families have an extreme hatred for each one another. Romeo, from the Montague family, and Juliet, from the Capulet family, fall in love which causes tragic deaths in each family and finally the death of Romeo and Juliet themselves. In the prologue it describes Romeo and Juliet as "star crossed lovers", and as the Elizabethans believed very strongly in fate and the stars, this part is a key sentence because they would know that Romeo and Juliet would definitely meet and definitely die. This intensifies the tragedy of the whole play. The end of Act 1, Scene 4 is tense but at the start of Act 1, Scene 5 the tension is released and replaced by an uplifting party atmosphere. The ball is introduced by Lord Capulet saying: "Welcome, gentlemen! Ladies that have toes Unplagu'd with corns will walk bout with you." At the end of Act 1, Scene 4, Romeo talks about how he feels there is a "consequence yet hanging in the stars". This makes the audience feel really tense and makes them wonder what is going to happen at that ball. They might ask themselves if he will die in this scene, as they know from the prologue that he will die eventually, but they don't know when, so this really makes everything very tense. ...read more.

Tybalt responds to this by saying: "I will withdraw, but this intrusion shall, Now seeming sweet, convert to bitt'rest gall." When Lord Capulet tells Tybalt to leave Romeo alone, it takes a bit of persuading first. This shows the audience that Tybalt really does hate Romeo and wants to kill him really badly. But as he does listen to his uncle in the end, it shows that he has respect for him and listens to his advice and does not want to embarrass him in front of everyone. However, he says that, although now everything is fine now, he will get Romeo in the end. This makes everything tense because the audience doesn't know when he is going to kill Romeo or what is going to happen next. He says 'bitt'rest gall' which means that when he does get Romeo, it will be horrible and bitter. This again shows Tybalt's personality. It also shows that Tybalt is loyal to his family by hating the Montagues. So this sentence really does intensify everything because the audience does not know what is going to happen now and they also don't know if Tybalt will actually kill Romeo. Romeo thinks he is unworthy of Juliet and he thinks she is too good for him, he lets her know this by saying: "If I profane with my unworthiest hand, This holy shrine, the gentle sin is this;" He is saying that he does not feel worthy of touching her hand as the thinks her hand is better than his. ...read more.

When Juliet says this, it's at the end of the scene. When the scene is finished, Romeo and Juliet know that they're enemies and the audience is left confused and very tense. They will have a lot of questions on their minds because they don't know what is going to happen now, or if Romeo and Juliet are still going to see each other or if this is the end of their relationship and they also ask themselves when Romeo and Juliet are actually going to die, because in Act 1, Scene 5 there were lots of opportunities for Romeo to be killed. So overall, there is an extremely strong contrast between love and hate in Act 1, Scene 5 which makes the audience go from tense to happy to tense again. Shakespeare uses a lot of language devices, such as metaphors, which make the sentences more meaningful and stronger, oxymoron which creates stark contrast and juxtaposition, which are the complete opposites, love and hate, in this scene. It shows the love between Romeo and Julie and the hate between the Montagues and the Capulets. Shakespeare also uses a lot of exaggeration to intensify. He does this by using exclamation marks and short sentences. The end of the scene also intensifies the play, as Romeo and Juliet find out that they are enemies and are meant to hate each other, but how can they hate each other when they love each other so richly and entirely, regardless of anything? ?? ?? ?? ?? Lizzie Seffer ...read more.