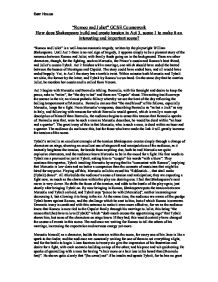 How does Shakespeare build and create tension in Act 3, scene 1 to make it an interesting and important scene?

"Romeo and Juliet" GCSE Coursework How does Shakespeare build and create tension in Act 3, scene 1 to make it an interesting and important scene? "Romeo and Juliet" is a well-known romantic tragedy, written by the playwright William Shakespeare. Until Act 3 there is no real sign of tragedy, it appears simply to be a pleasant story of the romance between Romeo and Juliet, with family feuds going on in the background. There are other characters, though, for the fighting, such as Mercutio, the Prince's cousin and Romeo's best friend, and Juliet's cousin Tybalt. Act 2 finishes with a marriage, one which should have ended the hatred between the houses of Montague and Capulet. The story could have ended here, and all would have ended happily. Yet, in Act 3 the story has a terrible twist. Within minutes both Mercutio and Tybalt are slain, the former by the latter, and Tybalt by Romeo's own hand. On the same day that he marries Juliet, he murders her cousin and is exiled from Verona. Act 3 begins with Mercutio and Benvolio talking. Benvolio, with his foresight and desire to keep the peace, asks to "retire", for "the day is hot" and there are "Capels" about. ...read more.

His outrage, bordering on disgust, at Romeo's "calm, dishonourable, vile submission" is greater than the previous displays, for now he goes so far as to draw his sword against Tybalt, the "rat-catcher" as he calls him, playing on the meaning of his name and casual title. He continues this, saying that he would have "but one of [Tybalt's] nine lives" and then "dry-beat the rest of the eight". His direct challenge to Tybalt, telling him to draw his sword "by the ears", "lest {his own] be about [Tybalt's] ears", is the final spark to set everything off, Tybalt now being "for[him]" and drawing his sword. This fight is now the first peak of tension in the scene, and the audience is completely captivated, their anticipation, their expectation, perhaps even their desire finally being satisfied. Mercutio's death, however, is unexpected, and it sends the audience into shock. All of a sudden the fight is ended, Tybalt having "under Romeo's arm [thrust] Mercutio in", and the audience is left watching a slowly dying Mercutio and an inadequately concerned Romeo and Benvolio. They believe that "the hurt cannot be much", as it is "a scratch", according to Mercutio. ...read more.

This drop helps take the audience's mind off the tension, and so the following rapid increase in tension is far more unexpected. Having a second peak helps build upon the tension of the first, and the drama of the second battle is itself built upon "brave Mercutio" having "too untimely... [scorned] the earth". This finishes the tension within the scene, and by ending it with the bustle of all the important characters, such as the bereaved Lady Capulet, and filling it with a lot of heavy, dramatic rhyme, including the Prince's finishing speech, proclaiming Romeo's exile, Shakespeare manages to end all tension within the scene, and yet keep the scene going, and maintain the emotion within it. As shown, there are several methods used within Act 3, scene 1 to create and build suspense and tension, all of them expertly woven together and building upon each other, in order to make the scene as dramatic and involving for the audience as possible. Shakespeare combines techniques of ordinary writing, poetry and stagecraft together so subtly that it is difficult to distinguish one from another, and all work together, aided by the structure of the scene, to create the heavy tension and anticipation that makes this important scene one of the most powerful and dramatic in the entire play. ?? ?? ?? ?? Sam House ...read more.