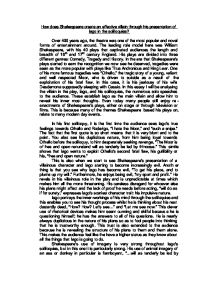 How does Shakespeare create an effective villain through his presentation of Iago in the soliloquies?

How does Shakespeare create an effective villain through his presentation of Iago in the soliloquies? Over 400 years ago, the theatre was one of the most popular and novel forms of entertainment around. The leading role model here was William Shakespeare, with his 40 plays that captivated audiences the length and breadth of 16th and 17th century England. His plays are divided into three different genres: Comedy, Tragedy and History. In the era that Shakespeare's plays started to earn the recognition we now see he deserved, tragedies were seen as the more popular with plays like Titus Andronicus and King Lear. One of his more famous tragedies was "Othello," the tragic story of a young, valiant and well respected Moor, who is driven to suicide as a result of the exploitation of his fatal flaw. In this case, it is his jealousy of his wife Desdemona supposedly sleeping with Cassio. In this essay I will be analysing the villain in the play, Iago, and his soliloquies, the numerous solo speeches to the audience. These establish Iago as the main villain and allow him to reveal his inner most thoughts. Even today many people still enjoy re-enactments of Shakespeare's plays, either on stage or through television or films. This is because many of the themes Shakespeare based his plays on, relate to many modern day events. In his first soliloquy, it is the first time the audience sees Iago's true feelings towards Othello and Roderigo, "I hate the Moor," and "such a snipe." ...read more.

The use of "our" furthermore involves the audience in Iago's plan making. This makes the audience think that he is trustworthy, as he is revealing his plans to them. He also, as in the first soliloquy, shows signs of his duplicitous character by stating that he'll have Michael Cassio "on the hip." This also shows that Iago wants to keep Cassio close to him also re-emphasises Iago's manipulative streak. By the time you reach the end of this soliloquy, Iago has realised how he is going to put his plans into action, although he states that he hasn't finished it, and "Tis here but yet confused: Knavery's plain face is never seen, till used." His true intentions will never be revealed until the moment comes. By using the words "plain face," it makes him sound more honest and believable for the audience. This makes the audience less wary of him as they have discovered a little bit more about his plan. However, the audience wants to see his plans put into action quickly, as the planning stage of Iago's villainy is nearing its end. In Act 2 Scene 2, Iago gives the audience his actual plans for the first time in the play, "If I can fasten one cup upon him." The word "fasten" gives you the impression that it is fixed and there is nothing you can do about it. Iago has made sure that this is going to happen and that there is no way back. It also shows how decisive Iago is when it comes to plan making. ...read more.

He also talks about potions and poison in "potations pottle-deep" and "doth like a poisonous mineral, gnaw my inwards." These connotations reinforce the dark forces and sorcery surrounding Iago. By one of his later soliloquies in Act 5 Scene 1. His plan is nearing his end, "I have rubbed this young quat almost to the sense/and he grows angry." This is also purposely ambiguous; it could be either his plan or talking about Roderigo. In this quote, "angry" could either be his plan nearing its climax, or Roderigo literally getting angry. However, as Roderigo gets ready to fight Cassio, Iago doesn't really mind who dies at first. This is because if Cassio dies, Roderigo would want all of the gold he has given to Iago to help him pursue Desdemona back; if Roderigo died, Cassio would live, and he would make Iago look ugly due to Cassio being attractive. In the end Iago realises that Cassio must die, "No, he must die," because as well as him making Iago look ugly, he might reveal Iago's true intentions to Othello, and put Iago, "...in much peril." In conclusion, I think that Iago is quite effective as a villain in this play. His plan is very good and is going well, and he could see how it is going to unfold. However, his control of the plan was not that good as in the end his plans unravelled on him, causing him to be sent to be tortured, Othello and Desdemona dying and Cassio becoming the Governor of Cyprus. In the play, as well as plotting an evil plan, he uses many techniques to portray himself as being evil. ...read more.

This essay engages well with the task, exploring how Iago's soliloquies make him villainous. I wasn't too sure on the way it is structured, and would've looked for common techniques rather than analysing each soliloquy in chronological order. A part ...

This essay engages well with the task, exploring how Iago's soliloquies make him villainous. I wasn't too sure on the way it is structured, and would've looked for common techniques rather than analysing each soliloquy in chronological order. A part of becoming more sophisticated at GCSE level is the choice of paragraphs, and I feel this is a good example of solid content but poor organisation. Most of the introduction is unnecessary, where useless contextual information is bolted on. I would've preferred to have seen a definition of a villain, and in particular within the context of a tragedy. This could've allowed for a solid argument showing the significance of Iago's soliloquies in building Othello's tragedy.

The analysis in this essay is solid. Imagery and language techniques are explored, and the embedding of quotes allows sharp analysis. I do, however, have a big query with this essay. It constantly refers to Iago as if he makes the decisions in the plot. By having this style, you do not access the analysis of why Shakespeare has constructed Iago's soliloquies to affect the audience. A good example is "Although Desdemona doesnÃ¢â‚¬â„¢t know it, she will be helping Iago in his plan to help him exploit OthelloÃ¢â‚¬â„¢s jealousy." This sentence adds nothing and retells the story. If I were doing this essay, I would be exploring why Shakespeare does so, possibly saying how it builds hatred for Iago. The audience response is explored, but in my opinion it is not a significant enough part of the essay. I would like to note that at GCSE level you must talk about the effectiveness on stage, and the dramatic effect, rather than effectiveness within the constraints of the plot.

The essay isn't structured well. Yes it has a clear introduction and conclusion, but these are weak and focus too much on the plot rather than the effect. The essay has a chronological structure, which may seem logical, but prevents any sophisticated discussion. Spelling, punctuation and grammar are fine. It was a shame to see the first person used, and this should be refrained from in an English Literature essay, at any level.