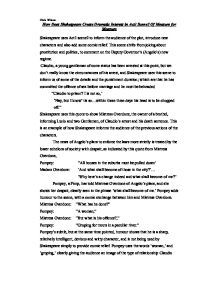 Chris Wilson. How Does Shakespeare Create Dramatic Interest in Act1 Scene2 Of Measure for Measure Shakespeare uses Act1 scene2 to inform the audience of the plot, introduce new characters and also add some comic relief. This scene shifts from joking about prostitution and politics, to comment on the Deputy Governor's (Angelo's) new regime. Claudio, a young gentleman of some status has been arrested at this point, but we don't really know the circumstances of his arrest, and Shakespeare uses this scene to inform us of some of the details and the punishment duration; which are that he has committed the offence of s*x before marriage and he must be beheaded. "Claudio to prison? Tis not so,' 'Nay, but I know' tis so...within these three days his head is to be chopped off." Shakespeare uses this quote to show Mistress Overdone, the owner of a brothel, informing Lucio and two Gentlemen, of Claudio's arrest and his death sentence. This is an example of how Shakespeare informs the audience of the previous actions of the characters. The news of Angelo's plans to enforce the laws more strictly is treated by the lower echelons of society with despair, as indicated by this quote from Mistress Overdone, Pompey: "All houses in the suburbs must be pulled down' Madam Overdone: 'And what shall become of those in the city?'... 'Why here's a change indeed and what shall become of me?" Pompey, a Pimp, has told Mistress Overdone of Angelo's plans, and she shows her despair, clearly seen in the phrase 'what shall become of me.' ...read more.

By saying this he is being made an example of and that it's the quality/harshness of the punishment that matters not the amount of people punished for the sin. The pre-contracted agreement of marriage between Claudio and Juliet his sweetheart was common between people in the Elizabethan period, so Shakespeare's contemporary audience would not have looked upon Claudio's 'crime,' nearly as harshly as Angelo had done. Here Shakespeare is influencing the audience's opinion of Angelo making them side with Claudio thereby adding greater dramatic effect to anything Angelo does, increasing the dramatic interest not only in the scene but in the play also. The speeches of Lucio, the two Gentlemen, Pompey and Mistress Overdone are all in prose, giving the early part of the scene, where these characters appear a common tone, an example of this is the conversation between Lucio and the Two Gentlemen, "Behold, behold, where Madam Mitigation comes. I have purchased many diseases under her roof." This quote gives an example of the kind of people Lucio mixes with and also, what kind of a person Lucio is. Joking about 'purchasing many diseases,' doesn't give the audience a positive reflection on Lucio's character, and certainly gives a firm impression of the kind of 'house,' Mistress Overdone runs. Shakespeare lowers the character of Lucio when we see him involved in some bawdy jesting with the two Gentlemen, this shows how Shakespeare's humour would have appealed to the audiences of his day, First Gentleman: 'I had as lief be a list of an English kersey, as be piled, as thou art piled, for a French velvet,' Here we can see Shakespeare's humorous play on words. ...read more.

The prospect of a confrontation between Isabella and Angelo at this point creates an element of anticipation for the audience, thereby enhancing the dramatic tension in the scene. This scene, so early in act1 and therefore the play, is I believe pivotal in establishing many of the characters with the audience. It also introduces the plight of the condemned Claudio and an indication of the type of ruler Angelo is going to be. An important question that becomes apparent to the audience at this point is whether Claudio has been given 'Measure for Measure?,' does his punishment fit the crime he has committed. Not only does this bring into question Angelo's suitability to govern but also it throws up doubts as to whether the other characters in the play will receive 'Measure for Measure,' and if Angelo will obey his own rules and judgements. Furthermore the audience must question the motivation of the Duke, to abandon his people to the harsh judgements of a leader such as Angelo; without any apparent reason or explanation. The confrontation between Angelo and Isabella is another subplot where Shakespeare leaves the conclusion till the very end. We are also allowed to make suppositions about how the characters will relate to each other in the future, for example how will the morally upright Isabella fairs with the bawdy nature of Lucio, and where is the Duke? What are his intentions, all of these plots and scenarios increase the dramatic tension. This heightens the drama because we can see, as the play unfolds, whether our initial suppositions prove to be true. ...read more.