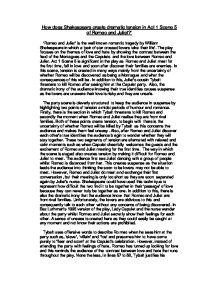 How does Shakespeare create dramatic tension in Act 1 Scene 5 of Romeo and Juliet?

How does Shakespeare create dramatic tension in Act 1 Scene 5 of Romeo and Juliet?' 'Romeo and Juliet' is the well known romantic tragedy by William Shakespeare in which a 'pair of star crossed lovers take their life'. The play focuses on the themes of love and hate by showing the contrast between the feud of the Montagues and the Capulets and the love between Romeo and Juliet. Act 1 Scene 5 is significant in the play as Romeo and Juliet meet for the first time, fall in love and soon after discover their families are enemies. In this scene, tension is created in many ways mainly from the uncertainty of whether Romeo will be discovered as being a Montague and what the consequences of this will be. In addition to this, Juliet's cousin Tybalt threatens to kill Romeo after seeing him at the Capulet party. Also, the dramatic irony of the audience knowing their true identities causes suspense as the lovers are unaware their love is risky and they are unsafe. The party scene is cleverly structured to keep the audience in suspense by highlighting two points of tension amidst periods of humour and romance. Firstly, there is the section in which Tybalt threatens to kill Romeo and secondly the moment when Romeo and Juliet realise they are from rival families. Both of these points create tension, to begin with there is the uncertainty of whether Romeo will be killed by Tybalt as this concerns the audience and makes them feel uneasy. ...read more.

In Romeo's first sighting of Juliet he expresses his emotions in a soliloquy in which he emphasizes Juliet's beauty through metaphors and the use of colour imagery. Romeo compares Juliet to 'a snowy dove trooping with crows' which separates her radiant looks from everyone else around her. Romeo describes her as 'a rich jewel in an Ethiop's ear' that 'hangs on the cheek of night' therefore comparing her to a rare and valuable object showing that she stands out of the crowd. In this soliloquy, Romeo often relates to Juliet as the light in comparison to the darkness that surrounds her and subsequently this reinforces the light and dark theme that Shakespeare uses during the play. Shakespeare conveys Romeo and Juliet's opening words to each other in the form of a sonnet which shows how well the two connect after only meeting once and illustrates how they were destined to be together. The effect of using a poem also removes the tension in the scene and causes the audience to forget about the nastiness that surrounds Romeo and Juliet and instead concentrate on the love between them. Throughout Romeo and Juliet's first conversation they relate to one another as Romeo being a 'pilgrim' who has travelled towards a 'holy shrine', Juliet. This religious imagery demonstrates the depth and purity of their love and underlines the conflict in the scene between good and bad. ...read more.

One technique Shakespeare uses is he differs the amount of tension throughout the scene and this keeps the audience constantly on tenterhooks and apprehensive as to what is to happen. As well as this, the discovery of Romeo and Juliet's identities question the audience as to whether they will carry on loving each other. However, I believe the way in which tension is created the most effectively is the threat from Tybalt because it leaves the audience with a feeling of apprehension as they are oblivious as to when he will take his revenge on Romeo. In addition to the tension, there are three main ways through which the audience feel suspense: the irony of Tybalt's final words, Romeo and Juliet both predicting their own fate and the ending lines of the chorus. These factors cause the audience to enter the next scene concerned for the future of Romeo and Juliet as they appear vulnerable in their unfortunate situation. This scene manages to dramatise the tension between love and hate by quickly showing snippets of the love between Romeo and Juliet and the obstacles they will face, for example the strife between their families. Overall, this scene is extremely eventful and exciting which engages the audience. It is cleverly structured to make the scene run smoothly despite there being many tense situations. On the whole, the party scene has to be by far my favourite scene of 'Romeo and Juliet' as it captivates the audience and involves them in Romeo and Juliet's love affair. ?? ?? ?? ?? ...read more.