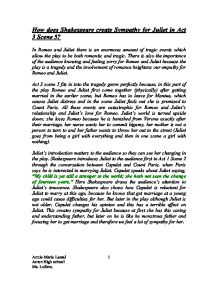 How does Shakespeare create Sympathy for Juliet in Act 3 Scene 5? In Romeo and Juliet there is an enormous amount of tragic events which allow the play to be both romantic and tragic. There is also the importance of the audience knowing and feeling sorry for Romeo and Juliet because the play is a tragedy and the involvement of romance heightens our empathy for Romeo and Juliet. Act 3 scene 5 fits in into the tragedy genre perfectly because, in this part of the play Romeo and Juliet first come together (physically) after getting married in the earlier scene, but Romeo has to leave for Mantua, which causes Juliet distress and in the scene Juliet finds out she is promised to Count Paris. All these events are catastrophic for Romeo and Juliet's relationship and Juliet's love for Romeo. Juliet's world is turned upside down; she loses Romeo because he is banished from Verona exactly after their marriage, her nurse wants her to commit bigamy, her mother is not a person to turn to and her father wants to throw her out to the street (Juliet goes from being a girl with everything and then in one scene a girl with nothing). Juliet's introduction matters to the audience so they can see her changing in the play. Shakespeare introduces Juliet to the audience first in Act 1 Scene 2 through the conversation between Capulet and Count Paris, when Paris says he is interested in marrying Juliet. Capulet speaks about Juliet saying, "My child is yet still a stranger to the world; she hath not seen the change of fourteen years." ...read more.

And with that Lady Capulet shows that she doesn't feel any extraordinary way about Juliet and shows the audience that probably she did not only not breast feed her due to traditional reasons, but to avoid embarrassment, or because she is by nature a cold, uncaring person. Shakespeare's use of double meaning in Juliet's words creates a bond between Juliet and the audience because, the characters on stage don't know the real meaning of Juliet's words. When Juliet says "Madam, I am not well" this could mean 'Madam, I am not feeling well' but in Juliet's case it means "Madam, I am crying for Romeo" . There also is the double meaning word when Juliet says, "Feeling so the loss, I cannot choose but ever weep the friend." To lady Capulet this means she has lost a friend (the friend Juliet is talking about is Romeo; her lover) but, really in Juliet's case it means "I have never felt so empty, I have no choice but to cry for my love (Romeo)". Juliet continually talks of Romeo even it secret, indicating that he is always in her thoughts and heart. Shakespeare continually reminds us of the extent of her love for Romeo through the exploitation of language for dramatic and poetic or even figurative effects. The audience will comprehend this, but the characters won't. Shakespeare created a friendship language for Juliet and the audience to understand in secret only. An Elizabethan audience would understand every word Juliet is saying, this is how Shakespeare created the bond between Juliet and the audience. In their conversation Lady Capulet tells Juliet she will avenge Tybalts death. "We will have vengeance for it, fear it thou not. Then weep no more. ...read more.

Juliet would have told the Nurse things like this before and all this shows that Juliet and the nurse have become distant. Act 3 Scene 5 ends with a soliloquy which is an appropriate way to end the scene because a soliloquy is a dramatic or literary form of discourse in which a character talks to himself or herself or reveals his or her thoughts without addressing a listener. Due to the fact that Juliet is alone and has no one but herself now it makes it a powerful of ending, which emphasis's her loneliness. Juliet's last lines gives the audience the thought that she is desperate she says, "...I'll to the Friar, to know his remedy. If all else fail, myself have power to die." As well as emphasises Juliet's loneliness, it reminds us of her tragedy and ultimate end: 'death'. Shakespeare makes Juliet a tragic heroin from this point in the play. She fearlessly takes a potion from Friar Lawrence knowing this could hurt her family emotionally; she lies to Capulet about considering the marriage which she doesn't want to and finally she takes her own life with a dagger when she thinks that Romeo is dead. She is the heroine of the play, a character whom we can empathise with as she fights for her love. The effects of the scene are dramatic, tensions and very tragic the audience would have been involved in this because all theses factors help them understand the delivered messages. Shakespeare has developed Juliet's character very successfully by making us feel sympathy for her after getting to know her, see her dilemmas from her point of view and bond with her. Shakespeare achieved all this by making Juliet's character moral, philosophical and socially significant. ?? ?? ?? ?? 1 Annie-Marie Lawal Acton High school Ms. Lofters. ...read more.