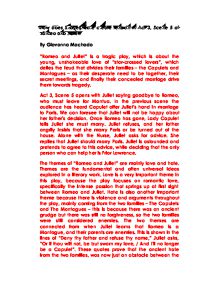 How does Shakespeare create tension in Act 3, Scene 5 of Romeo and Juliet?

How does Shakespeare create tension in Act 3, Scene 5 of Romeo and Juliet? By Giovanna Machado "Romeo and Juliet" is a tragic play, which is about the young, unshakeable love of "star-crossed lovers", which defies the feud that divides their families - the Capulets and Montagues - as their desperate need to be together, their secret meetings, and finally their concealed marriage drive them towards tragedy. Act 3, Scene 5 opens with Juliet saying goodbye to Romeo, who must leave for Mantua. In the previous scene the audience has heard Capulet offer Juliet's hand in marriage to Paris. We can foresee that Juliet will not be happy about her father's decision. Once Romeo has gone, Lady Capulet tells Juliet she must marry. Juliet refuses, and her father angrily insists that she marry Paris or be turned out of the house. Alone with the Nurse, Juliet asks for advice. She replies that Juliet should marry Paris. Juliet is astounded and pretends to agree to this advice, while deciding that the only person who can help her is Friar Lawrence. The themes of "Romeo and Juliet" are mainly love and hate. Themes are the fundamental and often universal ideas explored in a literary work. Love is a very important theme in this play, because the play focuses on romantic love, specifically the intense passion that springs up at first sight between Romeo and Juliet. ...read more.

An example of a rhetorical question from this scene is "What, wilt thou wash him from his grave with tears?" Lady Capulet says this, because when she sees Juliet crying, she automatically thinks that it is because of Tybalt's death. However, we (the audience) know that it really is because of Romeo leaving to Mantua. This question was not expected an answer, so it was mainly used for emphasis, of Lady Capulet once again asking why Juliet cried so much. By the implication that the answer is obvious, it is a means of achieving an emphasis stronger than a direct statement. A soliloquy is when the character is talking to the audience, revealing their thoughts. At the end of Act 5, Scene 3, Juliet does a short soliloquy telling only the audience her plans. This is shown in the lines of "Ancient damnation! Oh, most wicked fiend" From this line you can understand that Juliet no longer trusts her nurse and she will not confide in her again. Also in the soliloquy Juliet says that she will seek advice from Friar Laurence, and if he cannot help her, she says "if all else fail, myself have power to die". From this quote you can see that Juliet is madly in love, and is willing to kill herself if not married to Romeo. This device is used so the audience can really understand the character for who it is, not faking or pretending in front of the other characters. ...read more.

In the 16th Century and now, personification was/is constantly being used, because it makes an object sound more real and interesting. To conclude, Shakespeare used a range of different dramatic devices in this scene, to create tension, emphasise emotions, and make the play more interesting and alive. The main devices used were rhetorical questions, soliloquy, extended metaphor and personification. I think that this scene is very sad, because the audience knows that it is the last time the couple will see each other again. Also Juliet is being forced to marry Paris, even though she is madly and deeply in love with Romeo. A 16th Century audience would be familiar enough with the bewitching passion of love to feel some sympathy with the young couple. Also at that time, marriage was done for interest, meaning money, status or power. But marriage for affect, meaning love, friendship or s****l attraction was morally reprehensible. Affect was of secondary importance to interest. A 21st Century audience would find the play not a rebellious as the 16th Century audience probably would. However I think that now they would think to marry for love and attraction, but never for money or position, which is the opposite of the 16th Century. In my opinion, when I read the book for the first time, I thought it was very romantic, because of how they fell in the love at first sight. However I thought it was quite stupid how Juliet killed herself for Romeo, and vice-versa, instead of speaking up to her parents. ...read more.