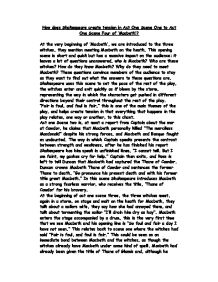 How does Shakespeare create tension in Act One Scene One to Act One Scene Four of 'Macbeth'? At the very beginning of 'Macbeth', we are introduced to the three witches, they mention meeting Macbeth on the heath. This opening scene is short and quick but has a massive impact on the audience; it leaves a lot of questions unanswered, who is Macbeth? Who are these witches? How do they know Macbeth? Why do they need to meet Macbeth? These questions convince members of the audience to stay as they want to find out what the answers to these questions are. Shakespeare uses this scene to set the pace of the rest of the play, the witches enter and exit quickly as if blown by the storm, representing the way in which the characters get pushed in different directions beyond their control throughout the rest of the play. "Fair is foul, and foul is fair," this is one of the main themes of the play, and helps create tension in that everything that happens in the play relates, one way or another, to this chant. ...read more.

Further on in this scene, Macbeth declares his loyalty to Duncan, this is another example of dramatic tension, where the audience and Macbeth know of his plans but Duncan, Banquo and the other characters do not. Duncan goes on to say that Malcolm will proceed to claim the throne, this angers Macbeth and the audience is able to see this but Duncan isn't. Macbeth talks aside, to the audience, and talks about how he is confident that Duncan doesn't know about his plans, "Stars, hide your fires, Let not light see my black and deep desires, The eye wink at the hand." The audience at this point will want Duncan to discover Macbeth's plans and not fall into the trap, the audience believes that Macbeth is under the witches command and he himself had become evil. This statement by Macbeth strongly contrasts with his earlier statement about being loyal to Duncan, and creates tremendous tension between these two characters. Shakespeare uses this tension brilliantly throughout the play and the introduction of Lady Macbeth in act one scene five has a grave impact on Macbeth and his actions. ...read more.