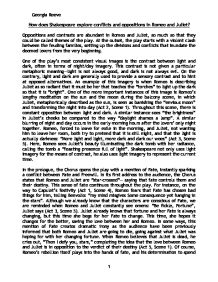 How does Shakespeare explore conflicts and oppositions in Romeo and Juliet?

How does Shakespeare explore conflicts and oppositions in Romeo and Juliet? Oppositions and contrasts are abundant in Romeo and Juliet, so much so that they could be called themes of the play. At the outset, the play starts with a violent clash between the feuding families, setting up the divisions and conflicts that inundate the doomed lovers from the very beginning. One of the play's most consistent visual images is the contrast between light and dark, often in terms of night/day imagery. This contrast is not given a particular metaphoric meaning-light is not always good, and dark is not always evil. On the contrary, light and dark are generally used to provide a sensory contrast and to hint at opposed alternatives. An example of this imagery is when Romeo is describing Juliet as so radiant that it must be her that teaches the "torches" to light up the dark so that it is "bright". One of the more important instances of this image is Romeo's lengthy meditation on the sun and the moon during the balcony scene, in which Juliet, metaphorically described as the sun, is seen as banishing the "envious moon" and transforming the night into day (Act 2, Scene 1). ...read more.

Juliet already knows that fortune and her Fate is always changing, but this time she begs for her Fate to change. This time, she hopes it changes for the better, saving the love between her and Romeo. In some ways, this mention of Fate creates dramatic irony as the audience have been previously informed that both Romeo and Juliet are going to die, going against what Juliet was hoping for with her changing fortune. When Romeo believes that Juliet is dead, he cries out, "Then I defy you, stars," completing the idea that the love between Romeo and Juliet is in opposition to the verdict of their destiny (Act 5, Scene 1). Of course, Romeo's rebellion itself plays into the hands of fate, and his determination to spend eternity with Juliet results in both of their deaths. This mechanism of fate works in all of the events surrounding the lovers: the feud between their families; the unfortunate series of events that ruin Friar Lawrence's plans at the end of the play; and the tragic timing of Romeo's suicide and Juliet's awakening. ...read more.

The ambiguity of the similarity between love and hate is reflected throughout Romeo and Juliet, whose language is riddled with oxymoron. "O brawling love, O loving hate," Romeo cries in the play's very first scene, using a figure of speech and setting up a theme that will be played out during the next five acts. Throughout the play, the use of the conflicting imagery and language, demonstrating the opposition between love and hate, create a dynamic tension, which powers the action that continues from start to finish. Right through the play, Shakespeare uses word devices such as antithesis and oxymoron, Shakespeare uses these devices because the setting of word against word powerfully expresses conflict through its use of opposites, and conflict is the essence of all drama. As well as the antithesis and oxymoron, Shakespeare uses the contrasting figurative language which conjures up emotionally charged mental pictures. His overall use of these techniques, using conflict and opposition, deepens the dramatic impact of events and strengthens the striking concepts that he is eager to convey. Georgia Reeve 1 ...read more.