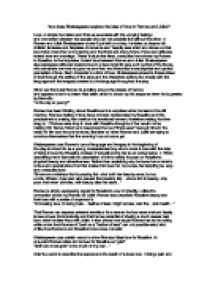 How does Shakespeare explore the idea of love in Romeo and Juliet?

How does Shakespeare explore the idea of love in Romeo and Juliet? Love. A simple four letter word that we associate with the undying feelings and connection between two people who can not possible live without the other. In Romeo and Juliet Shakespeare doesn't just tell us a story, he takes us beyond all childish fantasies and fairytales of romance and 'happily ever after' and shows us that love holds more than one meaning and that there are many forms of love and attitudes toward love and marriage. These include the false, unrequited love shown by Romeo to Rosaline, to the impulsive, instant love between Romeo and Juliet. Shakespeare also expresses attitudes towards love in a less romantic way such as that of the Nurse, who considers one man as good as another, and Mercutios more physical and cynical perception of love. Each character is a kind of love. Shakespeare presents theses ideas of love through the setting of the story and the characters actions but mostly with the language and the imagery created by the language throughout the play. When we first meet Romeo he is lolling around the streets of Verona and appears to be in a dream-like state, which is shown by his response when he is greeted by Benvolio. ...read more.

When Romeo sees Juliet for the first time he is fascinated by her beauty and starts to fall for her. "Did my heart love till now? For swear it, sight!, For I ne'er saw true beauty till this night" After this Rosaline has been forgotten and Juliet is Romeo's focus. He can now distinguish between his false love for Rosaline and his true love for Juliet. Romeo actively peruses Juliet from the very beginning unlike how he acted with Rosaline. Romeo initially describes Juliet as a bright jewel " Like a rich jewel in a Ethiopia's ear;" By comparing Juliet to a jewel in a black woman's ear Romeo is saying Juliet stands out against everyone else, she is beautiful, she is rare and precious, she is looked after like a precious stone. This is more than the beauty he described in Rosaline as he is signifying that Juliet has inner beauty as well. Shakespeare uses religious imagery from this point on, like when Romeo describes Juliet as a holy shrine, to signify Romeo's move from the overacted descriptions of his love for Rosaline to the deeper more spiritual true love Romeo has for Juliet. "this holy shrine" Comparing Juliet to a holy shrine shows how much Romeo loves Juliet as it reflects religion, witch was the biggest thing in those times. ...read more.

You don't really know why Mercutio has these views as Shakespeare never states why. One thing we do know is that Mercutio considers love to be nothing but a feeling brought on by l**t. Mercutio makes a lot of dirty jokes referring to s*x and during his famous Queen Mab speech it does not take him long to switch to the theme of s*x. "She is the fairies' midwife, and she comes..." to "Which oft the angry Mab with blisters plagues, Because their breaths with sweetmeats tainted are... This is the hag, when maids lie on their backs,..." He starts talking about fairies and goes onto talking about herpes and whores. Despite the play being over 400 years old it can never be truly out of date. The themes surrounding the play are still around today, especially love. Shakespeare wrote a play that everyone anywhere can relate to at least one character. We have all had that false love for someone who we believe we love but then realise nothing would ever come of it, we have all found (or will find in the future) our true love. And there are those who are still cynical about weather love really exists or believe love is just a intimate interaction with someone. Shakespeare explores the idea of love by showing us that love really does exist, even if it's not in the typical view of the word. ...read more.