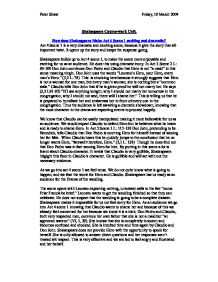 How does Shakespeare Make Act 4 Scene 1 exciting and dramatic?

Shakespeare Course-work Unit. How does Shakespeare Make Act 4 Scene 1 exciting and dramatic? Act 4 Scene 1 is a very dramatic and exciting scene, because it give the story that all-important twist. It opens up the story and keeps the suspense going. Shakespeare builds up to Act 4 scene 1, to make the scene more enjoyable and exciting for us as an audience. He does this using dramatic irony. In Act 3 Scene 2 L: 60-100 Don John convinces Don Pedro and Claudio that Hero is not "a maid" in this sense meaning virgin. Don John uses the words "Leonato's Hero, your Hero, every man's Hero." (3,2 L: 78) This is shocking here because it strongly suggests that Hero is not a woman for one man, but every man's woman, she is nothing but a "common stale." Claudio tells Don John that if he is given proof he will not marry her. He says (3,2 L91-92) "If I see anything tonight, why I should not marry her tomorrow in the congregation, why I should not wed, there will I shame her." This is telling us that he is prepared to humiliate her and embarrass her in front of every one in the congregation. Thus the audience is left awaiting a dramatic showdown, knowing that the most character in the drama are expecting events to proceed happily. ...read more.

She is spoken of with complete contempt. Shakespeare uses Leanato to shock the audience even further. In with great distress shouts out "Hath no man's dagger here a point for me."(IV, 1, 102) when he says this he is saying that can any one kill him, he feels his life is over and is no longer worth living. His only child has shamed him and he no longer has anything to be proud of. This highlights even more the importance of young's woman's purity when she is given in marriage. Leonato dismiss Hero. He Wishes her dead. He says, "Death is the fairest cover for her shame that may be wished for."(L: 118-119) Even while Hero is unconscious lying on the floor he still has no sympathy for her and her continues to pour shame on her with one long speech with insult after insult. We know that Leonato is completely convinced with one statement, "Could she here deny the story that is printed in her blood?"(L: 114) Her guilt is revealed from her blushes and she cannot deny what she has done. Leonato wishes her to die, when he says, "do not open thine eyes." he is saying go away and leave I don't want to see you. He calls her dirty and unclean. ...read more.

He chooses to end the scene on a more dramatic note. Benedick in an attempt to comfort Beatrice says. "Come bid me do anything for thee."(L: 278) Beatrice with very strong words replies "kill Claudio"(L: 279) This might be a shock, but quite understandable, as she is under the impression that Claudio is being nasty to Hero. Claudio refuses, but Beatrice is a strong woman. She is a very different character to Hero. She is very strong at heart very powerful with her words. Hero is a more timid character. When Claudio and Don Pedro were accusing her she was unable to stand up for herself. By make tow female character so close yet so very different Shakespeare shows that we cannot make assumptions about how women feel and behave. After much squabbling Benedick ends the scene just as dramatically as it started. "Enough, I am engaged, I will challenge him." (L: 13) This is a very tense moment. Much could happen from here and we are worried for Benedick and Claudio, and we can only hope that all is cleared up before anything else happens and Don John causes complete disruption. Act 4 scene 1 has proven to be a scene with many twists and turns. Shakespeare manages to create an exciting and dramatic scene. Which ends on a note of suspense as intense at that of the opening. ?? ?? ?? ?? Peter Shaw Friday, 10 March 2004 ...read more.

In this essay, we have been shown some of the ways used by Shakespeare to make this scene "exciting and dramatic". However, too much of the essay is made up of a retelling of the plot, with not enough analysis of how the author produced the effects under discussion. Quotations and references to the text are used effectively to support points being made.

Paragraph construction is mostly controlled effectively but sentence construction and spelling need revision. The essay would have benefited by the writer's having read it through again and edited out many glaring mistakes.