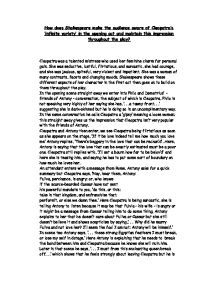 How does Shakespeare make the audience aware of Cleopatra's 'infinite variety' in the opening act and maintain this impression throughout the play?

How does Shakespeare make the audience aware of Cleopatra's 'infinite variety' in the opening act and maintain this impression throughout the play? Cleopatra was a talented mistress who used her feminine charm for personal gain. She was seductive, lustful, flirtatious, and sarcastic, she had courage, and she was jealous, spiteful, very violent and impatient. She was a woman of many contrasts, facets and changing moods. Shakespeare shows these different aspects of her character in the first act then goes on to build on them throughout the play. In the opening scene straight away we enter into Philo and Demetrius' - friends of Antony - conversation, the subject of which is Cleopatra, Philo is not speaking very highly of her saying she has, '. . .a tawny front. . .' suggesting she is dark-skinned but he is doing so in an uncomplimentary way. In the same conversation he calls Cleopatra a 'gipsy' meaning a loose woman; this straight away gives us the impression that Cleopatra isn't very popular with the friends of Antony. Cleopatra and Antony then enter, we see Cleopatra being flirtatious as soon as she appears on the stage, 'If it be love indeed tell me how much you love me' Antony replies, 'There's beggary in the love that can be reckon'd'. Here, Antony is saying that the love that can be exactly estimated must be a poor one. Cleopatra still replies with, 'I'll set a bourn how far to be belov'd' and here she is teasing him, and saying he has to put some sort of boundary on how much he loves her. ...read more.

The messenger gives Cleopatra the impression that she is much better than Octavia in every respect and Cleopatra says, 'that's not so good. He cannot like her long.' so she has hope that Antony will not leave her for Octavia because she is the one he loves. At the end of this scene, we as an audience, discover that this play is about an imperfect love of two imperfect people. When Caesar turns against Antony and declares war against him, Antony agrees to fight and Cleopatra gives him her promises to back him up showing her masculinity when doing so, 'Sink Rome, and their tongues rot that speak against us! A charge we bear I' the war, and, as the president of my kingdom, will appear there for a man. Speak not against it; I will not stay behind.' Enobarbus says that Antony should battle on land because he has a stronger army by land but Antony replies to this with, 'by sea, by sea.' Enobarbus still tries to change his mind by saying, 'most worthy sir, you therein throw away the absolute soldiership you have by land;' but Antony doesn't listen and says, 'I'll fight at sea.' In the middle of the battle Cleopatra flees, 'like a doting mallard' and Antony follows her, the battle was lost Caesar won. We then see Antony in defeat, he offers his followers a ship laden with gold, and he tells them to take it and go and make peace with Caesar. He is ashamed of himself for turning and fleeing after Cleopatra. ...read more.

Hast thou no care of me? Shall I abide in this dull world, which in thy absence is no better than a sty? O! see my women,' Then Cleopatra makes a long but moving speech saying things such as, 'All's but naught;' , 'then is it sin to rush into the secret house of death?' In the final scene, Gallus and some soldiers burst into where Cleopatra is, forcing her to draw a dagger and say,' Quick, quick, good hands.' Her attempt to kill herself shows her bravery but Proculieus delivers a strong argument on why she shouldn't. Later this scene Caesar goes to see Cleopatra, he promises to take care of her and she goes along with all he says when he is there, but as soon as leaves she asks a guard to get her a asp, this shows her bravery and her loyalty to Antony. She doesn't want to betray Antony by being with Caesar once again. The clown brings the basket with the asp and then she says her farewell's and applies the asp to her arm straight after doing so she dies. Through out the play Cleopatra showed us, as the audience, all her different assets of her Character. Shakespeare provides us with a clear picture of Cleopatra she loves Antony dearly but she doesn't always want him to know that. She likes to know where he is but again she doesn't allow him to know that. She is a typical jealous woman and asks typical questions but won't accept the answers if they are not what she wants to hear. Cleopatra was very talented and always used her feminine ways to gain what she wanted, and she always succeeded. ...read more.