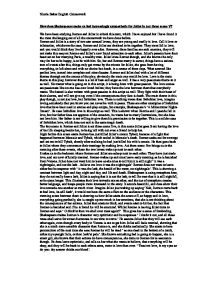 How does Shakespeare make us feel increasingly sympathetic for Juliet in Act three scene V?

How does Shakespeare make us feel increasingly sympathetic for Juliet in Act three scene V? We have been studying Romeo and Juliet in school this term, which I have enjoyed but I have found it the most challenging out of all the coursework we have done before. Romeo and Juliet is a story of two star crossed lovers, they are young and madly in love. Call it love or infatuation, whichever the case, Romeo and Juliet are destined to be together. They meet fall in love, and you would think they live happily ever after. However, there families are arch enemies, they will not make this easy on Romeo and Juliet's new found attraction to each other. Juliet's parents have their heart set on her marrying Paris, a wealthy man. Juliet loves Romeo though, and she knows the only way for her to be happy, is to be with him. So, her and Romeo marry in secret, things have a serious turn of events after this, things only get worse by the minute for Juliet, she goes from having everything, to left alone and with no choice but death, in a course of three days. What seemed like perfect love, turned into complete and utter disaster. Romeo and Juliet deal with a lot of different themes through out the course of the play, obviously the main one would be love. Love is the main theme to this play, however there is a lot of hate and anger as well. It has a very passionate theme to it as well. No matter what is going on in this script, it is being done with great passion. The love scenes are passionate like no one has ever loved before; they have the love between them that everybody wants. The hatred is also written with great passion in this script as well. They fight with their heart of their sleeves, and will not give up, even if the consequences they face is death. ...read more.

Now comes strike two. Her mother says to her, you know stop weeping I have news that will cheer you up. It is now she tells Juliet that they have arranged a date for her and Paris's wedding, its in TWO days! ' Shall happily make you his joyful bride'. Juliet is now really clever by what she says she tells her mother she can not marry Paris and uses a double meaning again, by saying if I were to marry anyone on Thursday I would rather marry Romeo, the man who killed my cousin. She does this to show her mother how much she does not want to marry Paris, as her mother thinks Juliet could never possibly marry Romeo. Of course Juliet is using double meaning, as she is already married to Romeo. ' I will not marry yet, and when I do, I swear it shall be Romeo, whom you know I hate.' Shakespeare has used dramatic irony here. I feel great sympathy for her now, after her mother breaks this news to her here. You have to remember Juliet is a religious girl, she is a true catholic. She has morals. She is already married, and it was a great scene to marry twice back then, and there was no such thing as divorce. If anyone were to find out, she would be executed. This shows a historical aspect of the play, the religious points, even though people are still religious today, someone would not be killed for marrying twice. Juliet must be feeling absolutely terrified at this point, no knowing what to do, who to talk to. Also, there is the fact not only can not marry Paris, but she loves Romeo and wants to be with him! I really feel for her in this part, but this is not even the half of it. Shakespeare continues to make us feel increasingly sympathetic towards Juliet. Juliet did use double meaning throughout the whole scene with her and her mother. ...read more.

I think it was a good interpretation of the play, but a play is a play and I think a live performance is always going to be better than a movie version. I would very much like to see this acted out. Juliet's character does change through out the play, at the start she is a very loyal girl, listens to exactly what her parents say. She is no way going to disobey them; she does what she is told with out a word. This is of course until she meets Romeo. I think he reminds her of the life she really wants, she wants passion, connection, excitement and most importantly true, real love. He changes her, and makes her in to a determined girl, who knows what to wants, and is not going to let others change her mind now, she is far to in love with Romeo to let her fathers disappointment change her mind. I personally think that many people watching this play when Shakespeare first wrote it, may not have felt very sympathetic towards Juliet, as they would have all been very religious, they may have been disappointed with Juliet's behaviour, marrying behind her fathers back, disobeying family, suicide. I am not to sure how they would respond to all of this; they may not have too much respect towards her. But then again, Juliet is a true catholic and did not just jump into bed with Romeo; she made sure he loved her and that they were married, before their relationship progressed. It is hard to tell how they would have reacted. So, Shakespeare makes us feel increasingly sympathetic towards Juliet through out the play, as it is just one gunshot after another in to heart, with no stopping them. She started off with everything, and ended up with not even hope of happiness. I have enjoyed studying this play, but I did find it very challenging, but I feel I understand Shakespeare's language a lot better now. Nicola Baker English Coursework ...read more.