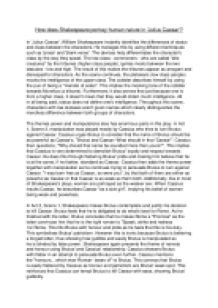 How does Shakespeare portray human nature in 'Julius Caesar'?

﻿How does Shakespeare portray human nature in 'Julius Caesar'? In 'Julius Caesar', William Shakespeare instantly identifies the differences of status and class between the characters. He manages this by using different techniques such as 'prose' and 'blank verse'. The devices help differentiates the character's class by the way they speak. The low class - commoners - who are called "idle creatures" by the tribunes (higher class people), ignites rivalry between the two statuses - low and high. The result of this makes the tribunes appear as arrogant and disrespectful characters. As the scene continues, the plebeians (low class people) mocks the intelligence of the upper-class. The cobbler describes himself by using the pun of being a "mender of soles". This implies the mocking tone of the cobbler towards Murellus (a tribune). Furthermore, it also proves that just because one is from a higher class, it doesn't mean that they would obtain much intelligence. ...read more.

This fills Brutus with honour and pride as he feels that this is his duty. This symbolises Brutus' patriotism. However this is ironic because Brutus is believing a forged letter, thus showing how gullible and easily Brutus is manipulated as he is blinded by false power. Shakespeare again presents the theme of naivety and honour using Brutus' and Cassius' relationship. Cassius showers Brutus with flatter in an attempt to persuade Brutus even further. Cassius mentions the "honours?which ever Roman- bears of" to Brutus. This conveys that Brutus is easily flattered by Cassius as honour and patriotism are Brutus' weak spot. This reinforces that Cassius can tempt Brutus to kill Caesar with ease, showing Brutus' gullibility. As Shakespeare starts to bring in the female charters into the scene, he presents them in a complete different way as to how men would usually be presented- an example for this would be how Portia, the wife of Brutus, is portrayed. ...read more.

Shakespeare conveys an image of patriotism as he suggests that Cassius's actions are only for the best interest of Rome - again highlighting that every man in the play remains loyal to their country. In Act 4 scene 2, Shakespeare portrays how war changes men - particularly Brutus. Since Caesar's death, Brutus has become more wary of his friendship with Cassius as their relationship has changed due to trust issues. "Hot friend cooling", this suggests that the warmth of Brutus' and Cassius' friendship was "cooling" off since the death of Caesar. Also it implies that it is clear that there is friction between Brutus and Cassius. Shakespeare does this to create suspense in their relationship. In addition, Brutus has become more power hungry, observant and arrogant. "Hath given me some worthy cause to wish things done undone, but if he be at hand I shall be satisfied". This proves that he is more aware of his capabilities to rule Rome, however it could also be that, he subconsciously fears Cassius may turn against him as he had done the same with Caesar. ...read more.