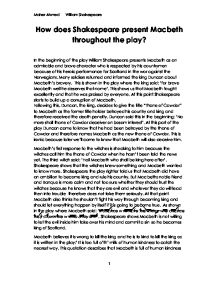 How does Shakespeare present Macbeth throughout the play

How does Shakespeare present Macbeth throughout the play? In the beginning of the play William Shakespeare presents Macbeth as an admirable and brave character who is respected by his countrymen because of his heroic performance for Scotland in the war against the Norwegians. Many soldiers returned and informed the king Duncan about Macbeth's bravery. This is shown in the play where the king said: 'for brave Macbeth well he deserves that name'. This shows us that Macbeth fought excellently and that he was praised by everyone. At this point Shakespeare starts to build up a corruption of Macbeth. Following this, Duncan, the king, decides to give the title "Thane of Cawdor" to Macbeth as the former title holder betrayed his country and king and therefore received the death penalty. Duncan said this in the beginning: 'No more shall thane of Cawdor deceiver on bosom interest'. At this part of the play Duncan came to know that he had been betrayed by the thane of Cawdor and therefore names Macbeth as the new thane of Cawdor. This is ironic because later we'll come to know that Macbeth will also deceive him. Macbeth's first response to the witches is shocking to him because the witches call him the thane of Cawdor when he hasn't been told the news yet. The third witch said: 'Hail Macbeth who shall be king here after'. Shakespeare shows that the witches knew something and Macbeth wanted to know more. Shakespeare the play righter told us that Macbeth did have an ambition to become king and rule his country. ...read more.

Lady Macbeth therefore quickly requests them to stay as she says: 'Sit worthy friends. My lord is often thus and has been since his youth'. Lady Macbeth makes this up because she knows that if Macbeth does something else strange or says something he shouldn't have mentioned they're deeds will be revealed. But Macbeth does carry on and says as it's shown in play: 'Never shake thy glory locks at me'. I think Shakespeare uses the word glory & locks because as we saw in the movie Macbeth and the description in the play (book) Banquo's curly hair covered in blood as if he had a bloodbath. This eventually provoked Macbeth that the banquet could not be continued and everyone left the place. Shakespeare does continue to present Macbeth as a man troubled by his conscience. At this stage of the play the audience could sense that Macbeth had a troubled mind because as we knew from the earlier scenes Macbeth had these illusions even before he had killed Duncan where he could see the daggers, therefore this time at the banquet he saw the ghost of Banquo. I think Macbeth gets Banquo killed rather than killing him himself because I think he thought that if someone else kills him he will not have a guilty conscious and will feel responsible but as we could discover afterwards Macbeth does start to have false visions. Seeing the ghost of Banquo explains that Macbeth was stressed as he was the only one to see the ghost. ...read more.

Whiles I see lives, the gashes do better upon then'. Macbeth does not want to be killed in his own castle because he still believes that he can't be beaten although the third apparition has become true because the army came up the hill using branches from the woods. As Macbeth charges towards Macduff to fight he is told by Macduff that he is not born of women because he has been untimely ripped out of his mother's womb. Macbeth hears this and knows that this is going to be his end but he stills fight's till he has been killed. This shows that Macbeth although he had become evil with time still was brave enough to fight and face army on his own. To summarise Shakespeare's play Macbeth I would say Shakespeare has presented in Macbeth a man who allowed himself eventually to be totally corrupted by seeking power of course I think lady Macbeth goaded Macbeth by insulting his manhood and making him feel cowardly that also leads him to be evil. As a play righter Shakespeare clearly shows many sides of a character driven by ambition. Shakespeare shows Macbeth as a great friend, husband and great warrior but tempted by the witches, goaded by lady Macbeth and his own evil degenerates into a monster. His downfall is his own greed his inhumanity to others. He finds it difficult to stop the evil he has unleashed. Therefore I think that Macbeth as portrayed stops off as a good man but unfortunately ends up as totally evil disliked intensely by people and far too cruel to be a good ruler. ?? ?? ?? ?? Maher Ahmed William Shakespeare 1 ...read more.