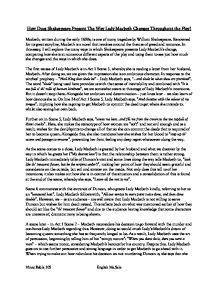 How does Shakespeare present the change of Lady Macbeth?

How Does Shakespeare Present The Way Lady Macbeth Changes Throughout the Play? Macbeth, written during the early 1600s, is one of many tragedies by William Shakespeare. Renowned for its great storyline, Macbeth is a novel that revolves around the themes of greed and romance. In this essay, I will explore the many ways in which Shakespeare presents Lady Macbeth's change, comparing how she is at numerous different aspects of the play and using them to see just how much she changes and the ways in which she does. The first we see of Lady Macbeth is in Act 1 Scene 5, whereby she is reading a letter from her husband, Macbeth. After doing so, we are given the impression she is an ambitious character. In response to the witches' prophecy - "Hail King that shalt be" - Lady Macbeth says, "...and shalt be what thou art promised". The word "shalt" being used here provides us with that sense of inevitability and combined with "It is too full o' th' milk of human kindness", we are somewhat aware at this stage of Lady Macbeth's intentions. But it doesn't stop there. Alongside her ambition and determination - just lines later - we also learn of how devious she is. On line 24 of Act 1 Scene 5, Lady Macbeth says, "And chastise with the valour of my tongue", implying how she is going to get Macbeth to commit the deed to get where she intends to, whilst also saving her own back. ...read more.

Yet, some paragraphs later, Macbeth - who was so reluctant on proceeding with the murder - seems fine in doing so, which is yet another indication of how much control Lady Macbeth has over the situation. The next we see of her is in Act 2 Scene 2, whereby she is delivering a soliloquy after Duncan's death. As it draws to a close, we see a different side to Lady Macbeth's character. Up until now, we have perceived her as a character with no "good aspect" to her, so to speak. However, at the end of the soliloquy, she talks of how she would've committed the deed "had he not resembled (her) father as he slept", giving us the impression that she isn't all bad. Yet again, though, it is the very sinister aspect to Lady Macbeth's character that we more than often see. Just lines after revealing something positive regarding her character, she responds to Macbeth's regrets by saying, "A foolish thought, to say a sorry sight", which tells us that she feels no remorse in contributing to Duncan's death. What's more, it's also evident that she is emotionally stronger as she comforts him throughout the scene. In Act 2 Scene 3, Lady Macbeth is informed of Duncan's death by Banquo and reacts by saying, "Woe, alas! What in our house?" Alongside the many other characteristics we have already explored prior to this, we also learn of how good she is at hiding information. ...read more.

Yet another indication of how Lady Macbeth has changed is through her language. At the beginning of the play, we saw how Lady Macbeth talked in verse (which was conventional for "high" characters). However, both at the middle and the end, we notice how she speaks prose (the conventional way for "low stature" characters). Examples of this include when she tells the Thanes to leave - "Stand not upon the order of your going. But go at once" - and when she talks of Lady Macduff: "The Thane of Fife had a wife; where is she now?" Her mental breakdown, it later appears, leads to her committing suicide. In conclusion to this essay, I feel Lady Macbeth wasn't all bad and possessed some redeeming qualities, which was evident from when she talks about her father in her soliloquy and when she feels some guilt and remorse towards the end. Regardless though, what we make of her is someone who is evil and evidence of that was provided immediately upon entering the novel. And while it may seem Lady Macbeth entirely responsible for the carnage that took place, it was Macbeth who - at first - made the suggestion in her absence. Ultimately though, I feel Lady Macbeth made the decisive contribution that led to Duncan being murdered. In Macbeth's soliloquy, we saw how Macbeth was so persistent in not going ahead with it. Yet, some 20 lines later, Macbeth finds himself agreeing to it: a murder that cost both himself and Lady Macbeth their lives... ?? ?? ?? ?? Vinay Babla 10S English Ms.Sale ...read more.