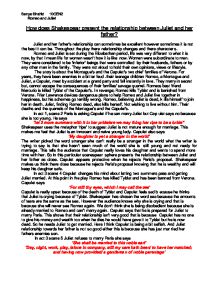 How does Shakespeare present the relationship between Juliet and her father?

How does Shakespear present the relationship between Juliet and her father? Juliet and her father's relationship can sometimes be excellent however sometimes it is not the best it can be. Throughout the play there relationship changes and there characters. Romeo and Juliet is set during the Elizabethan period, life was very different to what it is now, by that I mean life for women wasn't how it is like now. Women were subordinate to men. They were considered to be 'inferior' beings that were controlled by their husbands, fathers or by any other man in the family. They were not aloud to hold their own opinions, views or lifestyle. The story is about the Montague's and the Capulet's two chief families of Verona. For years, they have been enemies in a bitter feud .their teenage children Romeo, a Montague and Juliet, a Capulet, meet by accident at a grand party and fall instantly in love. They marry in secret but, cannot escape the consequences of their families' savage quarrel. Romeos best friend Mercutio is killed Tyblat of the Capulet's. In revenge; Romeo kills Tyblat and is banished from Verona. Friar Lawrence devices dangerous plans to help Romeo and Juliet live together in happiness, but his schemes go terribly wrong. ...read more.

He thinks about Juliet a lot and thinks he is making the right decision. 'I pray you tell my lord and my father, madam/I will not marry let' This would seem as disobedient and in the Elizabethan times because the father had all the power in them days and you couldn't go against them. When Capulet comes upstairs, lady Capulet tells lord Capulet that Juliet has refused marrying Paris, he changes from the kind father to the evil nasty father and doesn't get it, he doesn't know were he has gone wrong. We pity Capulet here because he is confused and upset and doesn't know what's going on. Shakespear changes the behaviour and language of lord Capulet by making him raise his voice and saying 'Doth she does not give us thanks' He is trying to say that she is so ungrateful; he doesn't know why she has said no. in the Elizabethan times all the Elizabethan people would be shocked that Juliet has said this. He also says 'drag her on a hurter thither' He is so mad with her, like in that time he must be thinking how dare she, how can she be so disobedient, who does she thing she is. ...read more.

Shake sphere presents the relationship like it is because it gives off more emotion at the end. Shake sphere uses specific words, for Juliet he uses 'ripe' and 'stranger' but as the play goes on Capulet is wrong to use those words. Because she isn't naive and innocent. People would have different opinions on who should be blamed for the death of Romeo and Juliet. I don't think it is one person's fault I think they all made the wrong decisions. Personally I would most blame it on the messenger because he didn't give Romeo the letter saying Juliet is not dead, not only the messenger the priest is to blame as well because he came up with the fake death he got them married and he failed with the message. In those days if someone cursed you it would come true and Mercutio cursed their families so he is to blame as well. Romeo and Juliet knew this was not possible yet they got married and lastly Capulet shouldn't have forced Juliet to get married and the two families are against each other because of an old fume. They could have had a new start with each other. So everyone is to blame. Throughout the play shakespear is manipulating us. ?? ?? ?? ?? Sanya Shahid 10CEN2 Romeo and Juliet ...read more.