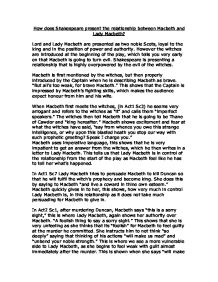 How Does Shakespeare Present the Relationship between Macbeth and Lady Macbeth

How does Shakespeare present the relationship between Macbeth and Lady Macbeth? Lord and Lady Macbeth are presented as two noble Scots, loyal to the king and in the position of power and authority. However the witches are introduced at the beginning of the play, which tells you very early on that Macbeth is going to turn evil. Shakespeare is presenting a relationship that is highly overpowered by the evil of the witches. Macbeth is first mentioned by the witches, but then properly introduced by the Captain when he is describing Macbeth as brave. "But all's too weak, for brave Macbeth." This shows that the Captain is impressed by Macbeth's fighting skills, which makes the audience expect honour from him and his wife. When Macbeth first meets the witches, (in Act1 Sc3) he seems very arrogant and refers to the witches as "it" and calls them "imperfect speakers." The witches then tell Macbeth that he is going to be Thane of Cawdor and "king hereafter." Macbeth shows excitement and fear at what the witches have said, "say from whence you owe this strange intelligence, or why upon this blasted heath you stop our way with such prophetic greeting? ...read more.

This makes Lady Macbeth's power over him falter, as she starts to lose the capability to manipulate Macbeth. At this point in the play there seems to be a defining moment, as Macbeth starts to take the murder in to his own hands, as he says he is going to perform a "deed of dreadful note." There roles have been reversed and now Macbeth is in control, saying to her that she should be "innocent" of the act, this quote echoes Lady Macbeth's "innocent flower," quoted previously in the play. This shows how their relationship has been twisted and their roles been reversed. This now shows us that Macbeth has the control over Lady Macbeth, "tomorrow I will go to the weird sisters," this shows that Macbeth is beginning to make choices for himself, instead of having his wife do it for him. Macbeth also starts to plan things for himself, as can't wait any longer. "I am in blood, stepped in so far that should I wade, no more returning were as tedious as to go over." Even though Macbeth didn't want to kill Duncan, it is now apparent that, ///f he was to stop murdering, to make things right now would be as bad as committing the offence itself. ...read more.

"Life's but a walking shadow, a poor player that struts and frets his hour upon the stage and then is heard no more. It is a tale told by an idiot, full of sound and fury signifying nothing." This shows that Macbeth has reflected back on his life and realised that he has accomplished nothing. This is a very important moment for Macbeth, as he has ruined his life because of his and his wife's greed and ambitions. However in this speech, he realises that his actions were pointless, despite how hard "one struts and frets" in life, it is "but a walking shadow" and "signifying nothing," and Macbeth has thrown away "his hour," as his life or his play was "full of sound and fury." However, we must ask whether it is this futility in life discovered by Macbeth, or the fact that their relationship has been deteriorating that Macbeth almost shrugs off his wife's death? Perhaps it is Lady Macbeth's callous ways that have taught Macbeth not to care. By the end of the play, we see how their relationship has deteriorated weakened to such a state that Macbeth no longer cares whether she is alive or dead, where as at the beginning of the play he had trouble with Duncan's death, someone far less close to him than his own wife. ...read more.