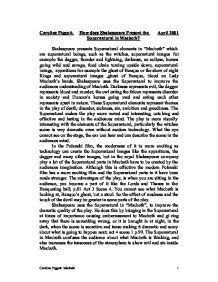 How does Shakespeare Present the Supernatural in Macbeth?

Caroline Piggott. How does Shakespeare Present the April 2001 Supernatural in Macbeth? Shakespeare presents Supernatural elements in "Macbeth" which are supernatural beings, such as the witches, supernatural images for example the dagger, thunder and lightning, darkness, an eclipse, horses going wild and savage, food chain turning upside down, supernatural beings, apparitions for example the ghost of Banquo or the show of eight Kings and supernatural images ,ghost of Banquo, blood on Lady Macbeth's hands. Shakespeare uses the Supernatural to improve the audiences understanding of Macbeth. Darkness represents evil, the dagger represents blood and murder, the owl eating the falcon represents disorder in society and Duncan's horses going mad and eating each other represents upset in nature. These Supernatural elements represent themes in the play of death, disorder, sickness, sin, ambition and greediness. The Supernatural makes the play more varied and interesting, catching and effective and lasting in the audiences mind. The play is more visually interesting with the elements of the Supernatural, particularly the witches scene is very dramatic even without modern technology. What the eye cannot see on the stage, the ear can hear and can describe the scene in the audiences mind. In the Polanski film, the moderness of it is more exciting as technology can create the Supernatural images like the apparitions, the dagger and many other images, but in the royal Shakespeare company play a lot of the Supernatural parts in Macbeth have to be created by the audiences imagination. Although this is effective the modern Polanski film has a more exciting film and the Supernatural parts in it have been made stronger. The advantages of the play, is when you are sitting in the audience, you become a part of it like the Lords and Thanes in the Banqueting hall; p.81 Act 3 Scene 4. You cannot see what Macbeth is looking at, Banquo's ghost, but a stool. So the effect of madness and the touch of the devil may be greater in some parts of the play. ...read more.

This is shown by him saying "Witchcraft celebrates Pale Hecate's off'rings, and withered murder, Alarumed by his sentinel, the wolf." This means that he is associating the idea of murder as an offering to Hecate the goddess of witchcraft and hearing the alarmed howl of the wolf guarding her. He wants to be quiet and secret and prays to the earth that he is not heard and that nothing gives him away. This shows when he says" Thou sure and firm-set earth, Hear not my steps, which way they walk, for fear thy very stones prate of my whereabout," When he hears a bell, he feels it is a funeral bell and is tolling for Duncan, "Hear it not, Duncan, for it is a knell that summons thee to heaven or to h**l." "This rhyming language sounds like a witches chant and creates a spooky atmosphere. The entire speech shows Macbeth's' increasing insanity, seeing visions and talking of witchcraft and associating the sound of the bell with a funeral. In Act 2 Scene 2, after the murder, Macbeth is obsessed by his inability to say "Amen", and by a voice crying that he has murdered sleep and will never sleep again. Lady Macbeth dismisses his hallucinations and orders him to return the daggers. He refuses. " But wherefore could not I pronounce "Amen"? I had most need of blessing and "Amen" stuck in my throat." This means that Macbeth cannot look to God for help anymore because of all his sin inside of him and devil like soul. The atmosphere conveyed to the audience is tense, dramatic and urgent. This is shown in the language used, as there are many short sentences and broken lines. "There's one did laugh in's sleep, and one cried, "Murder!", that they did wake each other; I stood, and heard them, but they did say their prayers and addressed them again to sleep." ...read more.

I think that Shakespeare wants the audience to understand that greed and hunger for power always in the end destroy you and you cannot get away with evil and sin and not pay a price. My personal response is that the Supernatural elements of the play are very effective and help the play a lot to portray evil, sin and wrongdoing. The supernatural helps my understanding of the play as each time a supernatural element comes into the play it shows and symbolises how Macbeth and all around him and involved with him are slowly going being corrupted and going to be destroyed by their guilt and sin. The supernatural is very useful in this way and is a good, exciting part of the play. In the time of Shakespeare and the Elizabethans, I think that the Elizabethan audience would have found Macbeth more tragic, sinful and evil than we do today as our beliefs are different now. I think that the Elizabethan audience had fixed views on everything and they were not used to change and seemed to dislike anything too new or different. A lot of images would not be so evil, dark and sinister now as they were then, as in the present we are open to a lot of new technology and changes. I do not know whether supernatural elements exist or not, but believe that evil ambitions can corrupt people and make them do evil things. I have not had any supernatural experiences. Macbeth himself was responsible for his own moral downfall and death and even though Lady Macbeth egged him on, it was his choice in the end. Macbeth should have been stronger and should not have gone to the witches and allowed himself to be tempted by dreams of ambition. I have learned from this play that you should never let greed and ambition rule your life and that evil and sin can result in madness. Shakespeare's language shows that the Elizabethans liked highly dramatic and over the top plays with horror and murder involved. 1 Caroline Piggott. Macbeth ...read more.