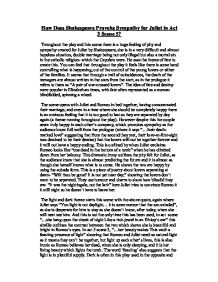 How Does Shakespeare Provoke Sympathy for Juliet in Act 3 Scene 5?

How Does Shakespeare Provoke Sympathy for Juliet in Act 3 Scene 5? Throughout the play and this scene there is a huge feeling of pity and sympathy created for Juliet by Shakespeare, she is in a very difficult and almost hopeless situation, double marriage being not only illegal but also a mortal sin in the catholic religion- which the Capulets were. He uses the theme of fate to create this. You can feel that throughout the play it feels like there is some hand controlling what is happening, out of the control of the young lovers or either of the families. It seems that through a trail of coincidences, the death of the teenagers are almost written in the stars from the start, as in the prologue it refers to them as "A pair of star-crossed lovers". The idea of fate and destiny were popular in Elizabethan times, with fate often represented as a woman blindfolded, spinning a wheel. The scene opens with Juliet and Romeo in bed together, having consummated their marriage, and even in a time where she should be completely happy there is an ominous feeling that it is too good to last as they are separated by day again (a theme running throughout the play). However despite this the couple seem truly happy in each other's company, which provokes sympathy as the audience know full well from the prologue (where it says "...their death-marked love" suggesting that from the second they met, their love-at-first-sight was destined to be their demise) ...read more.

Capulet cannot understand why Juliet is being so insolent because he is none the wiser of his daughter's marriage to Romeo (this is in line with the theme of the lack of understanding between generations); again we feel sympathy for her as Juliet does not have any plausible escape from the situation, as it seems fate has trapped Juliet due to a series of events and coincidences. Nowadays this would be seen as an incredibly rebellious and taboo thing to do without informing your father, but in Elizabethan times it was even more so as it was seen as the father's duty to find and approve a marriage for his daughter as the father had complete control of his offspring being part of the hierarchal structure of the world believed in Elizabethan times, so in this way an Elizabethan audience may feel a lot more sympathy towards the father. At first he has a tone of concern and care when he sees his daughter crying "...the bark thy body is Sailing in this salt flood" this extended metaphor showing he does love his daughter, describing her body as a boat being tossed on the sea- her sadness and tears, he says this with a very obvious caring tone, but soon turns sour when realising how disobedient Juliet is being "...hang, beg, starve, die in the streets" the caesuras in this line shows Capulet is in disbelief and so angry he can't string his sentence together. ...read more.

She cuts ties with her nurse in the soliloquy form, "Ancient damnation! O most wicked fiend!", the way she 'speaks to herself' here is very symbolic showing she is alone and has almost no-one to go for to talk to left. Then going to seek condolence with Friar Lawrence, the only other person apart from the nurse who knows the truth, knowing now if nothing can be done she will have to commit suicide, this is saddening as the audience realise she is almost at a dead end and everything has gone horribly wrong. Throughout this play, the way Shakespeare crafts and inspires sympathy from the audience for Juliet is very clever, although there is distinct differences from the sympathy felt now than felt by the Elizabethan audience which must be understood. Nowadays men can marry who they want, but then Romeo should've gained permission from Capulet to marry her daughter and give him a dowry. Family pride and honour was also very important in Elizabethan times, and two families which were rivals would not be something that would be ignored, especially in a small what was state like Verona where they probably were very important to its economy. Whereas in a present day audience, the way Juliet is treated will be seen as harsh and cruel as she just wanted to marry the man she loved and she couldn't because of what seemed to be a very selfish and childish disagreement of which neither of the families knew how it had begun. ...read more.