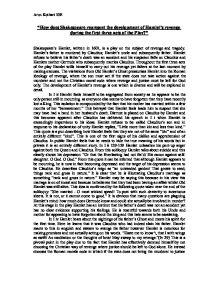 &quot;How does Shakespeare represent the development of Hamlet's revenge during the first three acts of the Play?&quot;

"How does Shakespeare represent the development of Hamlet's revenge during the first three acts of the Play?" Shakespeare's Hamlet, written in 1601, is a play on the subject of revenge and tragedy. Hamlet's father is murdered by Claudius; Hamlet's uncle and subsequently father. Hamlet refuses to believe his father's death was an accident and his suspicion falls on Claudius and Hamlets mother Gertrude who subsequently marries Claudius. Throughout the first three acts of the play Hamlet wills himself to carry out his revenge yet falters at the last moment by making excuses. The visitations from Old Hamlet's Ghost pressurises Hamlet into the Roman ideology of revenge, where the son must act if the state does not take action against the murderer and not the Christian moral code where revenge and justice must be left for God only. The development of Hamlet's revenge is one which is diverse and will be explored in detail. In I ii Hamlet feels himself to be segregated from society as he appears to be the only person still in mourning as everyone else seems to have forgotten that they have recently lost a King. This isolation is compounded by the fact that his mother has married within a few months of her "bereavement." ...read more.

This in principal is a useful trait to possess however when it comes to taking revenge it is a handicap. He is constantly enraging himself nevertheless he does not take action. Hamlet describes himself as "pigeon livered and lack gall."(II ii 564). He regular attacks himself over a quality which is human and natural, "Why, what an a*s I am! This is most brave/ That I, the son of a dear father murdered/ Prompted to my revenge by heaven and h**l/ Must like a w***e unpack my heart with words." The constant abuse he subjects himself to can only be detrimental to his mental state and does not make him any better suited to his task. Hamlet wishes to be of the nature of Pyrrhus, another young man whose quest it was to avenge his father, who does not think before he acts and therefore is ferocious, brutal and evil: he could be of no greater contrast to Hamlet. He wants to discard all his human traits so that he does not falter when he is delivered the chance to kill the King, yet the qualities he wishes to rid himself from are those of which he should hold most dear. ...read more.

A rat! Dead for a ducat, dead." Hamlet seems to be much more geared towards the task of revenge; however it could be said that he only killed Polonius because it was on the spur of the moment and this type of chance could never occur again. After Hamlet has killed Polonius, he carries on from what he was speaking about before. This is remarkable at it becomes clear that from now on he only cares about avenging his father and does not mind if he harms anyone whilst doing so. Since the Ghost had previously instructed Hamlet not to kill Gertrude, Hamlet uses the power of words to show his fury: "A b****y dead. Almost as bad, good mother/ As kill a king and marry with his brother."(III iv 28) In conclusion, Hamlet is an intellectual who finds it exceedingly hard to act on impulse. At the beginning of the play Hamlet knew he had to avenge his father but he did not know who to enact his revenge upon. Even with the Ghost's reassurance Hamlet found it impossible to kill Claudius and therefore made excuses to ease his mind, however by III iv he was in the state where he could easily be triggered off into killing the King, yet only with a barrier separating him from his deed. ?? ?? ?? ?? Arun Kothari 10E ...read more.