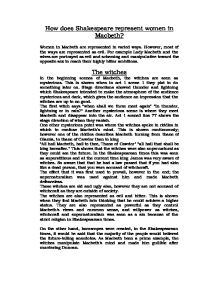 How does shakespeare represent women in macbeth?

How does Shakespeare represent women in Macbeth? Women in Macbeth are represented in varied ways. However, most of the ways are represented as evil. For example Lady Macbeth and the wives are portrayed as evil and scheming and manipulative toward the opposite s*x to reach their highly bitter ambitions. The witches In the beginning scenes of Macbeth, the witches are seen as mysterious. This is shown when in act 1 scene 1 they plot to do something later on. Stage directions showed thunder and lightning which Shakespeare intended to make the atmosphere of the audience mysterious and dark, which gives the audience an impression that the witches are up to no good. The first witch says "when shall we three meet again" "In thunder, lightning or in rain?" Another mysterious scene is where they meet Macbeth and disappear into the air. Act 1 scene3 line 77 shows the stage direction of when they vanish. One other mysterious point was where the witches spoke in riddles in which to confuse Macbeth's mind. ...read more.

On the other hand, horoscopes were created, in the Shakespearean times, it would be said that the majority of the people would believed the future-telling anecdotes. As Macbeth been a prime example, the witches manipulate Macbeth's mind and made him gullible after murdering Duncan. Lady Macbeth Lady Macbeth is seen as a very selfish female throughout the play; Shakespeare has portrayed Lady Macbeth to a whole new character to Macbeth as she is an ambitious woman, who has talked over Macbeth into making sacrifices for her. Usually sacrifices are usually made for love but in this situation the sacrifice was made for power and greed. Lady Macbeth used his manhood against him, she would prevail over Macbeth. In act 1 scene 7 Lady Macbeth says "When you durst do then you where a man, and to be more than what you were you would be so much more a man." In act 2 scene 2, Macbeth had just killed Duncan, Macbeth had just killed Duncan. ...read more.

Lady Macduff obviously has some opinions on Macduff reaction to Macbeth's behaviour. She uses imagery to describe her situation as a bird. "From whence himself does fly?" Macduff wasn't supposed to go with the family. "He wants to natural touch, for the poor wren." As the father is theoretically never leave his eggs, he left them unprotected. Lady Macduff probably felt destitute and vulnerable, forced to single-handedly take care of the children. She possibly felt unsafe with the children being left on their own. In Shakespearean times the husband had to be supportive and strong as their the person that holds the family together, bring home the food and protect the family whatever the case is Although Macduff wasn't there to protect the family when they were in need, Macduff did what his instincts told him to do. Clearly, Lady Macduff disagreed with the idea of moving with him. The reason of her not speaking up when she could was of the stereotypical ideas that the Shakespeare men had on women. They believed that they should cook, clean and care for the family. ...read more.

The exploration of women in 'Macbeth' is a very interesting topic; however the way it has been done in this essay doesn't allow for enough in depth analysis. When looking at the women in the play, contrast and link them and consider how they are used by Shakespeare to shape the plot and other characters.