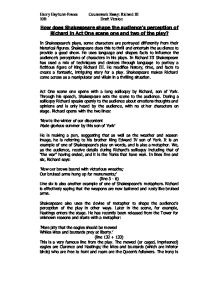 How does Shakespeare shape the audience's perception of Richard in Act One scene one and two of the play?

How does Shakespeare shape the audience's perception of Richard in Act One scene one and two of the play? In Shakespeare's plays, some characters are portrayed differently from their historical figures. Shakespeare does this to thrill and entertain the audience to provide a good show. He uses language and shapes facts to influence the audience's perceptions of characters in his plays. In Richard III Shakespeare has used a mix of techniques and devices through language to portray a fictitious figure of King Richard III. He modifies history, time, and facts to create a fantastic, intriguing story for a play. Shakespeare makes Richard come across as a manipulator and villain in a thrilling situation. Act One scene one opens with a long soliloquy by Richard, son of York. Through his speech, Shakespeare sets the scene to the audience. During a soliloquy Richard speaks openly to the audience about emotions thoughts and opinions and is only heard by the audience, with no other characters on stage. Richard opens with the two lines: 'Now is the winter of our discontent Made glorious summer by this son of York' He is making a pun, suggesting that as well as the weather and season image, he is referring to his brother King Edward IV son of York. ...read more.

We start to see how far he will go to get power. Back to 1:i's opening soliloquy and Richard's brother, "George, Duke of Clarence" enters, escorted guards, and the keeper of the tower, Brakenbury. Clarence has been arrested. But when they arrive Richard's attitude has changed, and he appears to be oblivious as to why Clarence has been arrested, much like Clarence himself. 'Brother, good day. What means this armed guard That waits upon your Grace?' (line 42 - 43) This word play is known as dramatic irony; the audience are aware of something, but characters on stage are not. Shakespeare creates an interesting mood for the audience because of the sense of secrecy, and the obliviousness of other characters on stage. This creates an element of suspense. Richard knows too well why Clarence has been arrested but acts as if he is unaware. Richard plays along with him and acts concerned towards his brother, but also jokes - he is secretly enjoying himself. He is appearing as a classic villain, he hides his thoughts and emotions to fool victims. Another place where Shakespeare has provided the ability to modify mood, is during 1:2 : Anne: 'And thou unfit for anyplace but h**l!' ...read more.

In Shakespearean times, people believed that being ugly was a reflection of a sinful evil nature, or perhaps a punishment for past wrong doings. Richard III didn't actually have a hunchback or withered arm. But this is not the only historical reference that has been changed. Shakespeare compresses time to suit the play's performance. To achieve dramatic intensity he made all kinds of alterations and additions. For example, Henry VI's funeral actually occurred seven years before Clarence's imprisonment; and Shakespeare invented Richard's wooing of Anne. Condensing time, and changing details helps the play to 'flow'. It provides a smoother front to the story, and also allows Shakespeare to write as he pleases. Language was another key ingredient which Shakespeare used to give Richard different personas at different times in the play. Most commonly: during 1:i and 1:ii, Richard could appear to be two different types of people, the villain, or the hero. He uses many metaphors and similes in his plays as they are often clever comparisons or a good way of revealing character's emotions and events. Word play, and special uses of language including dramatic irony, and dramatic intensity were used. Using cleverly laid out language Shakespeare could easily alter moods and opinions of characters in the play. In this way, Shakespeare has successfully shaped the audience's perception of Richard which also alters their perceptions of the play itself. Henry Hayhurst-France Coursework Essay: Richard III 10B Draft Version ...read more.