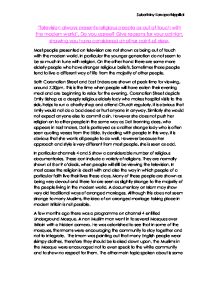 How does Shakespeare show the ways in which the relationship between Macbeth and Lady Macbeth changes in the play?

'Television always presents religious people as out of touch with the modern world'. Do you agree? Give reasons for your opinion, showing you have considered another point of view. Most people presented on television are not shown as being out of touch with the modern world. In particular the younger generation do not seem to be so much in tune with religion. On the other hand there are some more elderly people who have stronger religious beliefs. Sometimes those people tend to live a different way of life from the majority of other people. Both Coronation Street and East Enders are shown at peak time for viewing, around 7.30pm. This is the time when people will have eaten their evening meal and are beginning to relax for the evening. Coronation Street depicts Emily Bishop as a deeply religious elderly lady who makes hospital visits to the sick, helps to run a charity shop and attend Church regularly. ...read more.

In most cases the religion is dealt with and also the way in which people of a particular faith live their lives these days. Many of these people are shown as being very devout and there for are seen as slightly strange to the majority of the people living in the modern world. A documentary on Islam may show very old traditional ways of arranged marriages. Although this does not seem strange to many Muslims, the idea of an arranged marriage taking place in modern Britain is not possible. A few months ago there was a programme on channel 4 entitled Underground Mosque. A non Muslim man went in to several Mosques over Britain with a hidden camera. He was astonished to see that in some of the mosques, the Imams were encouraging the community to stay together and not to integrate. ...read more.

I feel that this is not due to the fact that the two ladies concerned are elderly, but also because of their faith, which is restricting them from certain parts of life which the majority of people would take for granted. Much more than this is the ways in which Muslims in the documentary were being told to concentrate only on their religion. This would give those Muslims an unbalanced idea of life in general. In my opinion the way in which religious people are brought up courage many of them to believe that their religion is best and that good thing can only come for their faith. This reads them to believe that non religious people do not always perform such good deeds and therefore makes us understand that the more religious people are not totally in touch with the modern world. ?? ?? ?? ?? Subathiny Kanapathippillai ...read more.