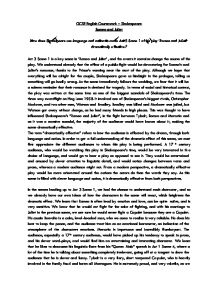 How does Shakespeare use language and action to make Act 3 Scene 1 of his play Romeo and Juliet dramatically effective?

GCSE English Coursework - Shakespeare Romeo and Juliet How does Shakespeare use language and action to make Act 3 Scene 1 of his play 'Romeo and Juliet' dramatically effective? Act 3 Scene 1 is a key scene in 'Romeo and Juliet', and the events it contains change the course of the play. We understand already that the effect of a public fight would be devastating for Romeo's and Juliet's romance, thanks to the Prince's warning near the start of the play. Although we hope that everything will be alright for the couple, Shakespeare gave us hindsight in the prologue, telling us something will go badly wrong. As the scene immediately follows the wedding, we fear that it will be a solemn reminder that their romance is destined for tragedy. In terms of social and historical context, the play was written at the same time as one of the biggest scandals of Shakespeare's time: The three way swordfight on Hog Lane 1958. It involved one of Shakespeare's biggest rivals, Christopher Marlowe, and two other men, Watson and Bradley. Bradley was killed and Marlowe was jailed, but Watson got away without charge, as he had many friends in high places. This was thought to have influenced Shakespeare's "Romeo and Juliet", in the fight between Tybalt, Romeo and Mercutio and as it was a massive scandal, the majority of the audience would have known about it, making the scene dramatically effective. The term "dramatically effective" refers to how the audience is affected by the drama, through both language and action. In order to get a full understanding of the dramatic effect of this scene, we must first appreciate the different audiences to whom this play is being performed. ...read more.

On stage, the actors would be moving around a lot, to convey to the audience the frivolity and playfulness of their characters, further relaxing the audience and lulling them into a sense of calm. This mood is completely shattered, and the tension rockets as soon as Tybalt enters the stage. Benvolio knows Tybalt can be extremely reckless, and so is instantly fearful and wary of the situation. As the audience look to Benvolio as an emotional barometer, we know the tension has risen immeasurably and that this cannot end well. Mercutio however, does not seem in the least bit concerned by Tybalt's entry, and this contrast of reactions clashes, making the scene dramatically effective " BENVOLIO By my head, here come the Capulets MERCUTIO By my heel, I care not" Mercutio's inappropriate use of word-play and humour here marks the beginning of his antagonistic role in this scene. When Benvolio says "by my head", it shows he is reasoned, and level headed. However Mercutio says "by my heel" which can be interpreted in several ways: Firstly, it shows he is a stubborn character, digging his heels in, and also it refers to the concept of an "Achilles heel", showing the audience that his frivolous and antagonistic attitude are going to cause his imminent downfall. When Tybalt enters, he has no quarrel with either Benvolio or Mercutio, and so is calm and controlled; Shakespeare shows this by having him speak in iambic pentameter. A Shakespearean audience would notice this, and think at first that Tybalt's entry is nothing to be concerned about. However, Mercutio has other ideas and begins to antagonise Tybalt whenever he can. ...read more.

The audience, being in the know about Romeo's marriage, are incredibly worried about how the fight will influence the course of the play, as a death would shatter any hope of Romeo and Juliet's happiness. When Romeo has killed Tybalt, and he realises that with Tybalt he has also killed his chances of a peaceful life, he says: "O, I am fortune's fool" This line has a massive impact on a Shakespearean audience who would be very superstitious and hence afraid and heavily influenced by the concepts of fate and destiny. Romeo uses alliteration again to show how important the realisation is. The audience now finally understand that his hubristic nature has conquered our hopes of a happy ending for him and Juliet, and the play will be a tragic one after all. In the final section, the audience are given time to reflect on what has just happened, and think about the consequences of this event. All the characters present in this section use rhyming couplets to emphasise the seriousness of the situation. Lady Capulet argues profusely to have Romeo sentenced to death, which is the final act that makes us understand things aren't going to be ok for Romeo and Juliet, and that problems will unfold hence forth. As the scene ends, the audience are tense as we fear for Romeo now that he has been exiled, and we wonder what will happen to him. This creates dramatic symmetry, with the scene both beginning and ending with tension in the air.So to conclude, Shakespeare uses language and action in many different ways to add to the dramatic effect of the scene. Some of the main ways are by letting the audience know things the characters don't, by clever choice of language, and by using humour and word-play to control the level of tension in the scene. ...read more.