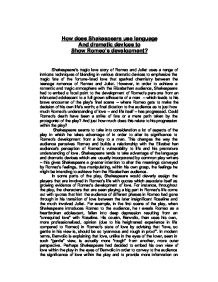 How does Shakespeare use language and dramatic devices to show Romeo's development?

How does Shakespeare use language And dramatic devices to Show Romeo's development? Shakespeare's tragic love story of Romeo and Juliet uses a range of intricate techniques of blending in various dramatic devices to emphasize the tragic fate of the fortune-fated love that sparked chemistry between the teenage romance of Romeo and Juliet. However, in order to achieve a romantic and tragic atmosphere with the Elizabethan audience, Shakespeare had to embed a focal point to the development of Romeo's persona from an infatuated adolescent to a full grown silhouette of a man - which leads to his brave encounter of the play's final scene - where Romeo gets to make the decision of his own life's worth; a final dictation to the audience as to just how much Romeo's understanding of love - and life itself - has progressed. Could Romeo's death have been a strike of fate or a mere path taken by the protagonist of the play? And just how much does this relate to his progression within the play? Shakespeare seems to take into consideration a lot of aspects of the play in which he takes advantage of in order to alter its significance to Romeo's development from a boy to a man. ...read more.

This just comes to show the immaturity of Romeo during this stage of the play, since he shows that he does not understand the differences between s*x and love. If in the Elizabethan ages, s*x was seen as a strong form of love, then the sympathy of the audience possibly shown at this stage would have been understandable, otherwise, Romeo would have been seen as a foolish teenager stuck between the borderline of hormonal infatuation and love. Note that he does not mention that Rosaline had rejected his love but rather gives the impression that she had rejected his invitation to "making" love. Could Shakespeare possibly have deliberately added this gap of opportunity with Romeo in order to create the plot of a "fortune fated" love with Juliet? When Romeo meets Juliet for the first time, Shakespeare alters the mood of the play by changing the depressed and sympathetic atmosphere the audience shares with Romeo onto a more relieved and romantic aura after Shakespeare reveals a renewed love to Romeo's life, which is Juliet. Prior to Romeo's meeting with Juliet, the audience can already see a more mature, and if not, a maturing side of Romeo. This is witnessed when Romeo refers Juliet's love to religion and provides a strong link between the two. ...read more.

When Rosaline rejected Romeo for his "love", Romeo gave up hope almost straight away, yet with Juliet; even the knowledge of knowing she is a sworn enemy to his family does not resist his love for her, and only temporarily builds a moment of despair for him. This can convey the build up in Romeo's confidence from the beginning of the play, as he would severely woe over an unrequited love but shuns any thought of the fact that Juliet is a Capulet. The greatest evidence of Romeo's transition in love especially is the fact that Rosaline was a mere sub-plot and Juliet is a second protagonist in the play. The significance of both players to Romeo is reflected onto the significance of them as characters in the play. The ending of the play is the highlighted tragedy of the play. Shakespeare's use of linguistic and dramatic devices show Romeo's development in order to build a greater time span than the actual five days and in order to create a love for Romeo's character by the audience (which generally is the cause of despair for his and his lover's tragic death) has successfully paid off. From an infatuated, s*x-hungry adolescent to a love struck "man", with enough courage to take his own life for his lover's vanished existence (as so he thought); Romeo may be a teen in plot but a man at heart. Sanyia Saidova 11G ...read more.